As EHR Use Expands, Attention Turns to ASCs

Finding a software package to meet the distinct needs of the ASC can be a challenge.

Due in large part to the CMS Meaningful Use incentives and penalties, physician use of electronic health records (EHR) has been increasing and has reached an unprecedented level. EHR system utilization among office-based physicians increased from 18% in 2001 to 57% in 2011 and to 72% in 2012.1 The same cannot be said for EHR use in ASCs.

In the absence of an EHR-specific federally prescribed program such as Meaningful Use, many ASC owners don’t feel compelled to face the challenges of going paperless. However, few doubt that such a program could eventually be applied to their facilities. They’re also considering that without EHR, compliance with future requirements or initiatives, such as an expanded ASC Quality Reporting Program or participation in an accountable care organization, could be more difficult. In addition, the broader use of EHR by office-based physicians has illuminated the in-house benefits that can eventually be realized in areas that have always been key to the mission of ASCs, such as efficiency and the patient experience. EHR may even become a significant recruiting tool for surgery centers, given that physicians working toward Meaningful Use incentive payments can apply their EHR use in an ASC as long as the facility’s EHR product is certified by the Office of the National Coordinator for Health Information Technology (ONC) or one of its authorized certification bodies.

Whether driven by external or internal factors or both, more owners of ASCs are beginning to explore their EHR options. They’re finding that the available EHR solutions, the majority of which are designed with the physician practice in mind, aren’t necessarily well suited to their needs. They need an EHR package that takes into account the rules and regulations specific to ASCs, primarily state licensure, CMS Conditions for Coverage and the standards established by accrediting organizations such as The Joint Commission and the Accreditation Association for Ambulatory Health Care (AAAHC). Charting requirements are different in the ASC than in the clinic, explains Farrell C. Tyson, MD, FACS, a surgeon with Cape Coral Eye Center in Florida. “For an ASC, it goes beyond documentation of the exam and coding,” he says. “An ASC needs to track and document more of a flow, from the moment the patient checks in to the moment he checks out. The record has to include not only what procedure was performed but also what medications, IVs, implants, and so on, the patient received and documentation of every encounter he has with a member of the ASC team.” 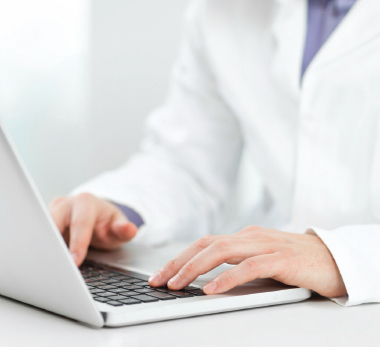 While many EHR companies don’t offer products for ASCs, there are some that began targeting surgery centers early on, such as AmkaiSolutions, Mountain Medical Technologies and Source Medical. In between, the options vary. For example, companies that offer physician-practice EHR may offer an ASC module or add-on.

According to Mary Ann Fitzhugh, vice president, marketing & business development at Compulink, “We’re one of the few ophthalmic EHR vendors to offer ASC EHR integration. Clients who use our EHR in their surgery center are more efficient and aren’t performing double data entry. Our ASC module allows them to pass information from their practice management and EHR system in the office directly to their ASC. We offer many pre-built reports within our system and also provide simple, powerful tools for customization.”

IO SurgeryWare from IO Practiceware is another EHR package used in ophthalmic ASCs. The company’s Web site says the software is designed solely for ophthalmology, and as a result, there have been no compromises to accommodate other specialties. CEO Gregory Leopold says, “All events occurring in the ASC can be documented at any level of detail desired. IO SurgeryWare is an excellent choice for practices with an ASC that’s used primarily for the doctors in that practice.”

Management Plus, which provides ophthalmology-specific software solutions, counts ASCs among the facilities using its EHR. Virginia Williams, graphic design and marketing coordinator, says the company works with every customer on an individual basis because every ASC is unique. “We have the tools to help surgery centers comply with various regulations,” she says. “Our software also gives them the ability to quickly and easily show all of the necessary documentation during any kind of auditing process.”

Jim Messier, vice president of sales and marketing at Medflow, describes his company’s surgery center EHR as “a fully developed ophthalmic ASC system.” It can run as a stand-alone program or be interfaced directly with a practice management system.

“The goal is to assist ASCs in being fully compliant with all regulatory and accreditation requirements as well as create a fully audited and compliant chart,” Messier says. “The software provides specific documentation areas for things such as nurse preop, nurse postop, nurse intraop, CRNA, anesthesia, discharge, doctor op-notes, addendums, orders, post-op CRNA, medications and vitals. Multiple areas can be documenting on the same patient at the same time. The Advanced Cataract Planning Tool is used in the operating room to aid the surgeon and staff with lens information and notes on the patient. Signature pads and bar code scanners are utilized at each station for accurate and efficient collection of information.”

Messier cites Eye Care Center of Central PA, whose surgeons perform approximately 4,500 cataract surgeries in an ASC each year, as a practice that has been using Medflow EHR successfully for 3 years.

ASC owners need an EHR package that takes into account the rules and regulations specific to ASCs, primarily state licensure, CMS Conditions for Coverage and the standards established by accrediting organizations such as The Joint Commission and the Accreditation Association for Ambulatory Health Care (AAAHC).

“They have created a solid charting process and deployed a very efficient system that allows a single surgeon to perform 50-60 procedures per day in one surgery rotation.”

Challenges and Rewards to Anticipate

Dr. Tyson has been making inquiries into EHR for his ASC. Based on his legwork so far, he says, “No one company seems to have it all.” One company may have a solid EHR package for the clinic side and great software for the optical but a weaker module for the ASC. Another may have a different combination of strengths and weaknesses. “One difficulty for vendors, particularly in regard to ensuring an ASC can comply with the relevant regulations, is they have to hit moving targets, and those targets are often contradictory,” Dr. Tyson notes. For example, according to Florida state authorities, every internal door in his ASC is supposed to lock. CMS, however, considers this a fire hazard.

In addition, EHR software must meet extensive criteria in order to be certified for use in the Meaningful Use program. Making the grade can require companies to modify almost any aspect of their product, which can in turn affect how it functions for those already using it. The ONC recently released its Standards & Certification Criteria for 2014, so more changes could be on the way. “Some companies just don’t want to get involved with ASC EHR,” Dr. Tyson says. “They see how so many regulations are open to interpretation, the way states differ on issues of compliance, and how state and federal rules can contradict.”

Another reason Dr. Tyson hasn’t settled on EHR for his ASC is he has yet to find one he thinks will allow him to remain efficient, a long-standing concern for any entity considering adopting EHR. “I can’t have what is now a simple step becoming a 5-minute step,” he says. “For instance, right now, to document which IOL a patient received, I peel the label off the lens box and stick it to the paper chart. I have seen EHR systems that require me to use separate drop boxes for indicating the type of lens, the manufacturer, the power and then I still have to enter a lengthy alphanumeric serial number.”

Ann Hotaling, ASC director at Ocala Eye in Florida, would like to bring EHR into the practice’s surgery center as soon as possible, but is reluctant to make the leap until she’s certain it won’t cause more problems than it fixes. She’s seen the benefits of EHR on the practice side but also the potential hurdles. “For me, the deciding motivating factor is whether I’ll be able to get through inspections. I think most ASC directors have the exact same thought. Does the EHR have all of the necessary fields and templates to capture all the data we need to capture?”

Best-case scenario, she states, would be for the necessary fields to be standard in the EHR’s knowledge base. She points to the ever-expanding list of what ASCs need to document, such as the latest Medicare Conditions for Coverage, which are more comprehensive than in the past. “For example, we need a field in the chart for documenting the disposition of the patient’s belongings in a certain way, whether they were given to a family member, placed under the stretcher, and so on,” she says. “We’ll also be facing ASC Quality Reporting requirements in the future that demand more sophisticated ways of reporting than those that are claims-based.”

Hotaling’s ASC recently switched from Joint Commission accreditation to the AAAHC and passed its survey with flying colors. “I know that using our paper charts we are A-OK for fulfilling our state and federal responsibilities. Everything we need to document and report has a field. Not every EHR can reflect that.” Knowing that some of the ASC’s fields and templates in EHR would have to be specific to her facility or state, Hotaling would prefer to avoid the need for too much customization. “Lots of practices have seen on the clinic side how your EHR customization, which can be expensive to create, could be lost if the vendor updates its software or modifies functionality because of Meaningful Use requirements.”

Both Hotaling and Dr. Tyson view EHR as the way of the future and are eager to use the technology in their ASCs as another source of innovation. They have answered the question of “if,” but they will keep working on the “when.” ◊