Inflammation of the cornea may result from a variety of insults including toxic, traumatic, allergic and infectious. This article will focus on key conditions that appear to be primarily inflammatory in nature, specifically staphylococcal marginal keratitis, peripheral ulcerative keratitis (PUK) and Mooren's ulcer.

Staphylococcal marginal keratitis is a peripheral inflammatory keratitis that usually demonstrates an intact overlying epithelium. However, the infiltrates are rarely associated with epithelial ulceration. The relationship between these “catarrhal infiltrates/ulcers” and staphylococcus was first recognized by Phillips Thygeson, MD, in 1946. It's currently accepted that bacterial antigens trigger an immune response in a sensitized cornea. This response is likely a type III hypersensitivity reaction involving immune complex deposition in the peripheral cornea with secondary activation of complement, which leads to neutrophil recruitment and infiltrate formation. By definition, these are sterile infiltrates with corneal scrapings demonstrating neutrophils without organisms and negative cultures.1

Patients typically present with mild to moderate symptoms that may include any or all of the following: pain, redness, foreign body sensation, photophobia and tearing. Slit lamp examination often reveals the characteristic findings of staphylococcal blepharitis with scaling, crusting, ulceration and telangiectatic vessels along the lid margin. The conjunctiva may show various degrees of injection but deeper scleral involvement is absent. Corneal manifestations include well-circumscribed peripheral stromal infiltrates that may initially be round but often coalesce into larger lesions. These lesions are separated from the limbus by a clear zone of 1-2 mm and often occur at the 2, 4, 8 and 10 o'clock positions due to their proximity to the lid margin. Left unchecked, prolonged inflammation may lead to further epithelial breakdown and frank ulcer formation. A more central location or significant intraocular inflammation should lead the clinician to consider an alternate diagnosis. Despite the significant symptoms felt by the patient, the process is often self-limited and spontaneous resolution often occurs over the course of several weeks. Often, faint superficial pannus formation or subtle triangular shaped scarring may remain and provide evidence of prior episodes (Figure 1). 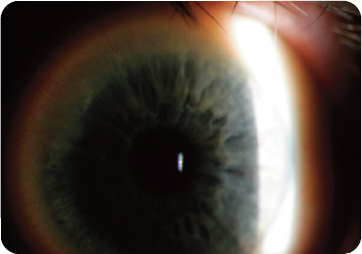 Figure 1. Slit lamp photograph of the left eye demonstrates moderate injection with well-defined infiltrates at the 10:30 o'clock position. The characteristic clear zone present and the epithelium is intact.

While the diagnosis is often apparent based on the characteristics and findings above, one particular differential diagnosis merits further discussion. An atypical marginal ulcer due to herpes simplex virus (HSV) may be confused with that of staphylococcal marginal keratitis. However, by paying attention to the following key features, the two processes can be more easily differentiated. The HSV ulcer will lack the clear zone at the limbus and will have a fine area of vascularization bridging. Furthermore, the HSV ulcer begins with an epithelial defect and only later develops a stromal infiltrate. The opposite sequence occurs in staphylococcal marginal keratitis. Other features suggestive of HSV include corneal hypoesthesia and a lack of blepharitis.

While Staphylococcal marginal keratitis is often selflimited, recurrence is common and treatment is often elected to mitigate the symptoms and shorten the time to recovery. The mainstay of treatment in the acute setting is the control of inflammation with the use of topical corticosteroids. When an epithelial defect is present, it's prudent to also treat with a broad-spectrum antibiotic to prevent secondary infection. The use of combination steroid/antibiotic drops or ointments may improve patient compliance. Longterm maintenance strategies to minimize the chance of recurrence include the institution of an eyelid-cleaning regimen with or without nightly application of antibiotic ointment with good Staphylococcal coverage. The use of oral tetracycline derivatives and newer generation topical macrolides for their anti-inflammatory as well as antibacterial properties may prove useful in refractory cases.

Peripheral ulcerative keratitis (PUK), while less commonly encountered, is even more important to identify as it may be associated with significant ocular morbidity and in select cases, systemic mortality. PUK is a peripheral inflammatory keratitis that is associated with necrotizing scleritis, epithelial ulceration, keratolysis and progressive thinning. Left untreated, this condition can progress to frank corneal melting with rapid perforation. While it's likely a type III reaction, the inflammatory response is much greater and involves the release of collagenases and other proteases that cause more extensive corneal destruction.1

While PUK can be due to infections (bacterial, viral and fungal), it's often found in the setting of systemic autoimmunity (50% of non-infectious cases).2 Sometimes, it's the earliest presentation of a systemic illness so the clinician should maintain a high index of suspicion so a potentially fatal diagnosis isn't overlooked. While the differential is broad, more common associations include: rheumatoid arthritis, Wegener's granulomatosis, polyarteritis nodosa, ulcerative colitis, relapsing polychondritis and systemic lupus erythematosus.3 A thorough review of systems — paying close attention to the musculoskeletal, dermatologic, pulmonary, renal and sinonasal systems — may provide clues to the underlying etiology. Although no definitive inheritance pattern may exist, a family history of autoimmunity should serve as a warning as well.

Patient presentation can vary greatly but the severity of symptoms often mirrors systemic disease activity. Although PUK can be bilateral and extensive, it's more often unilateral or asymmetric in its presentation, and the pathology is limited to one sector of the peripheral cornea.4 More common complaints include redness, pain, pain with eye movements (suggestive of associated scleritis), blurred vision, photophobia and tearing. Slit lamp examination often reveals an area of injection with variable degrees of vasco-occlusion. The corneal changes are confined to an area within approximately 2 mm of the limbus (Figure 2). The variation in corneal findings likely represents different stages in the disease spectrum with stromal infiltration, epithelial ulceration, and keratolysis with thinning being the most common. Other signs of anterior and posterior segment inflammation and vasculitis may also be seen. 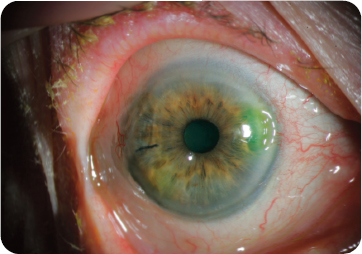 Figure 2. Slit lamp photograph of the right eye, broad beam, demonstrating a sector of inflammation at the 3 o'clock position with active ulceration and moderate thinning. A prior corneal patch graft can be partially visualized at the 9 o'clock position.

The diagnosis of PUK is made based on the clinical findings noted above but determining the underlying etiology often requires blood and urine testing, radiology studies and even tissue biopsy in select settings. Common screening tests include the following: CBC, BMP, ESR, CRP, RF, ANA, C-ANCA, P-ANCA, urine sediment and chest x-ray. Often, prompt referral to a rheumatologist familiar with these tests is warranted.

The treatment of PUK can be broken down into local ophthalmic treatment and systemic disease modification. With regard to local treatment, the primary goal is to decrease melting. This is achieved through a multipronged approach that improves wetting, decreases exposure and promotes reepithelialization. The frequent use of preservative-free artificial tears and ointments is mandatory and punctal occlusion with plugs or cautery can be considered, ideally once the acute inflammatory phase has subsided. Temporary or permanent partial tarsorrhaphy should be considered if significant exposure exists. Other maneuvers such as short-term patching, bandage soft contact lenses and amniotic membrane coverage may help promote more rapid epithelial closure. Adjunct topical treatments with sodium citrate 10%, N-Acetyl cysteine 20%, and medroxyprogesterone 1% with or without oral tetracycline derivatives have been used to inhibit collagenase.4 The use of topical corticosteroids and NSAIDs remains somewhat controversial and is often withheld if there is active epithelial ulceration or significant thinning because steroids may potentiate a corneal melt. Surgical maneuvers, including recession or excision of the adjacent limbal conjunctiva to decrease the source of inflammatory mediators, can lead to healing of the ulcer. Progressive thinning may require tectonic support in the form of a lamellar graft. Systemic disease modification requires immunosupression with systemic steroids, often coupled with cytotoxic agents. Good communication and prompt referral to a rheumatologist or other specialist familiar and comfortable with these agents and their side effect profiles is mandatory.

As the disease is often chronic, recurrence is common, so the patient must be educated as to recognize the earliest symptoms and seek urgent evaluation. Protective eyewear and lifestyle modification should be considered in cases involving significant corneal thinning, as a ruptured globe may occur even with minor trauma.

Mooren's ulcer is a painful, progressive, chronic, ulcerative inflammatory keratitis that is often included in the differential diagnosis of PUK. It should be stressed that this is an idiopathic condition and previously mentioned diseases should be ruled out first. The pathogenesis of Mooren's ulcer is less well defined, although it has the characteristics of an autoimmune process. Previous studies have documented an association with HLA-DR17, as well as hepatitis C infection and hookworm infestation. It's possible that Mooren's ulcer may represent a common endpoint of a variety of insults in susceptible patients.1 It appears to be quite rare, with only 287 cases described in the world ophthalmic literature as recently as 1997.5

Mooren's ulcer typically affects adults between the ages of 40 and 70, with a slight predominance in males. It's more often unilateral and the area of ulceration is typically subtotal and peripheral. Patients present with intense pain that can appear to be disproportionate to the amount of inflammation. Other symptoms including redness, tearing and photophobia are often less bothersome to the patient. Decreased visual acuity may be due to a high degree of irregular astigmatism. The typical slit lamp findings are that of a crescent-shaped, gray-white infiltrate involving the peripheral cornea with variable degrees of epithelial ulceration and stromal thinning. The ulcer is concentric to the limbus and the leading edge is undermined. Left untreated, the ulceration can advance both circumferentially and centrally until only a thin island of central cornea remains surrounded by a scarred, thin and vascularized rim in end-stage cases.1

The treatment is essentially the same as that of PUK and outcomes seem to be related to disease presentation, with unilateral cases having better outcomes.1