NSAIDs: Still a Vital Component of Cataract Surgery
Studies support the use of nonsteroidals and steroids for improved surgical outcomes.
BY KERRY D. SOLOMON, M.D.

Advances in cataract surgery have resulted in a procedure that generally produces clear corneas and minimal inflammation. This may lead surgeons to question if non-steroidal anti-inflammatory (NSAID) agents still have a role in modern cataract surgery.

According to the literature, NSAIDs remain a vital component of cataract surgery. I published a study in 2001 that looked at about 100 patients who were randomized to anti-inflammatories vs. placebo in a doubled-masked trial. Two weeks out, the cell flare and inflammation persisted significantly in the patients who received no drug. There's no question that prosta-glandins are released throughout the anterior segment of the eye during cataract surgery, and there's good evidence that prostaglandins are also released in the posterior segment, which manifests as conditions such as cystoid macular edema (CME). 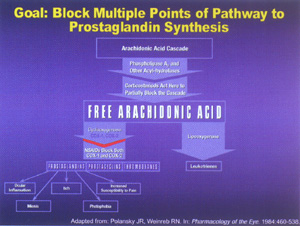 The variety of corticosteroid agents on the market might make us think we can rely solely on the softer steroids, such as rimexolone (Vexol) or loteprednol etabonate (Lotemax). It's important to rethink that strategy, however, because NSAIDs play a much more vital role than is readily apparent -- more vital, in fact, than steroids. Prostaglandins are responsible for much of the postoperative inflammation, and leukotrienes play an important role in causing late-phase allergy symptoms. The arachidonic acid cascade leads to the synthesis of these two metabolites. Steroids and NSAIDs reduce inflammation by blocking different parts of the arachidonic acid cascade. NSAIDs, such as ketorolac, specifically inhibit both constitutive COX-1 and inducible COX-2, limiting the production of prostaglandins. Steroids have many effects including the inhibition of arachidonic acid release, which inhibits prostaglandin synthesis indirectly. Both steroids and NSAIDs block the molecular pathway leading to prostaglandin production, but at different parts of the pathway. Inhibiting prostaglandin synthesis is thought to be important for reducing inflammation.1

Although it's true that steroids block the development of free arachidonic acids, the nonsteroidals block the prostaglandins that really are responsible for causing the inflammation and ill effects that we see surrounding cataract surgery. It is well accepted that inhibition of prostaglandin synthesis and release reduces the inflammatory response in conjunction with surgery and allergies.

Corticosteroids, however, act on other molecular pathways. In contrast, the NSAIDs specifically and irreversibly inhibit the synthesis of prostaglandins by interfering with the activity of COX-1 and COX-2.2 Corticosteroids have some side effects such as increasing IOP, but that's not necessarily a reason not to use them. It is, however, the most compelling reason to consider the use of NSAIDs surrounding cataract surgery.

We performed a study, comparing nonsteroidals to loteprednol etabonate. Patients didn't receive either drug until day one, and then we randomized them to one of two groups. We monitored these patients for symptoms of pain, photophobia, itching, foreign body sensation, cell and flare. The nonsteroidal reliably reduced not only cell, but also flare measurements very effectively. A number of other studies support these findings.

CME is the most frequent cause of vision loss after cataract surgery. Myaki and Ibaraki have noted evidence of as much as a 20% incidence of angiographic CME surrounding cataract surgery, and a 2% incidence of symptomatic clinically significant CME surrounding cataract surgery.3 Leon Solomon and colleagues reported angiographic evidence of CME in a group of 600 study participants. Using postoperative fluorescein angiograms, he found a clinically significant reduction of CME with the use of flurbiprofen sodium and a reduction of angiographic CME.4 Probably most important is that patients who did develop CME, despite being on the flurbiprofen sodium, not only had a lesser response and better Snellen and contrast sensitivity scores, they also had earlier recovery of their vision.

Now that we have optical coherence tomography (OCT) to evaluate CME, we need to reevaluate what's clinically relevant. If we had a LASIK patient return 1 week or 1 month postoperatively at 20/30 or 20/40 and complaining of blurred vision, we'd be very meticulous about looking at the ocular surface, making sure there was no dry eye, and looking very closely to see the etiology. Yet, I suspect many of us would tell a 20/30 cataract patient with blurred vision at 1 week or 1 month to keep taking his drops and return in a month. We're probably getting a lot more subtle edema in the macula that we might previously have termed angiographic CME, but as we've improved our techniques, we need to raise the bar on how we evaluate postoperative outcomes.

Modern surgical techniques have reduced the incidence and severity of inflammation, so we need to be very aggressive about translating this into the best quality of vision for our patients. We should aim for a 20/20 outcome on day one. To do this, in addition to fending off cell and flare in the anterior segment, we need to prophylax against CME.

Flach5 reported that following cataract surgery, topical NSAIDs were useful in prophylaxis and management of post-op inflammation. Solomon and colleagues6 showed that even with the application of modern surgical technology, there's evidence that treatment with NSAIDs is potentially beneficial. Numerous studies, including one by Ostrov and colleagues, have demonstrated that NSAIDs are as effective as and sometimes more effective than corticosteroids.7 They're effective for postoperative inflammatory complications, such as:

NSAIDs also play a role in pupillary miosis, as well as preventing postoperative inflammation and CME.

The only notable downside associated with NSAIDs is burning and stinging on instillation. We often tell patients that those sensations mean the drug is working. But now we have a new product -- Acular-LS -- which alleviates that problem. This product has a 20% lower concentration of the active ingredient, ketorolac, and a substantial reduction in BAK from 0.010% to 0.006%. The rationale for this change in formulation is to reduce adverse effects and increase patient comfort. 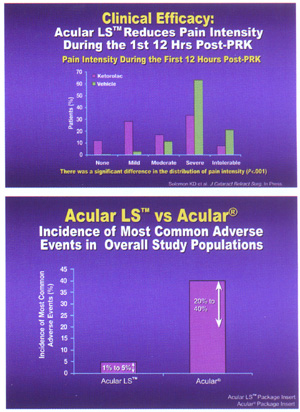 Price and colleagues recently completed a phase III multicenter, randomized, double-masked, vehicle-controlled, parallel-group study of 157 patients undergoing unilateral PRK.8 Patients received one drop of ketorolac tromethamine 0.4% or placebo q.i.d. for up to 4 days postoperatively. We recorded pain intensity, pain relief and use of escape medication, as well as adverse events, severity of ocular symptoms and visual acuity. Patients exited the study when re-epithelialization had occurred and they were pain-free.

During the first 12 hours post-PRK, there was a significant difference in the distribution of pain intensity. There were fewer ketorolac-treated patients in the "severe pain" and "intolerable pain" categories (43.1%) than vehicle-treated patients (87.2%).

Ketorolac continued to be superior to vehicle throughout the first 48 hours post-PRK.

Based on the clinical trials used for the FDA submissions, Acular LS has a lower incidence of commonly reported adverse events in the overall study population (1% to 5%) than does Acular (20% to 40%).

The use of ophthalmic NSAIDs and steroids in conjunction with surgery results in improved surgical outcomes, including reduced inflammation, pain and CME. We achieve optimal results when we use these two agents together, particularly with respect to preventing CME after cataract surgery. Acular LS has been shown to be clinically safe and tolerable, and it may be a more comfortable alternative to Acular.

I'm looking forward to using Acular-LS surrounding IOL and phakic IOL surgery. I think it's helpful to pretreat all cataract patients with nonsteroidals. I pretreat everyone 3 days before surgery, four times a day, with Acular-LS. I recommend having the drug on board to prevent inflammation and blunt the prosta-glandin release at the time of surgery. I use the same drop to inhibit miosis in the perioperative region, and then continue it postoperatively for CME prophylaxis. These NSAIDS are very effective for corneal pain and discomfort, so there's a role for them in refractive surgery, as well.