Emerging ocular resistance poses a significant challenge to clinicians. And identifying the anti-infective best-equipped to handle that challenge gives us an opportunity to rethink and refine clinical protocols.

Postoperative infection rates appear to be rising. Recent data suggest that endophthalmitis rates, usually 1 in 1,000, can be as high as 1 in 4001; and areas in Mexico have reported the rate as 1%, or 1 in 100.

At the Campbell Laboratory, we found that about 94% of endophthalmitis is caused by Gram-positives, and the remaining 6% by Gram-negatives, mirroring the findings of the 1990 Endophthalmitis Vitrectomy Study.2 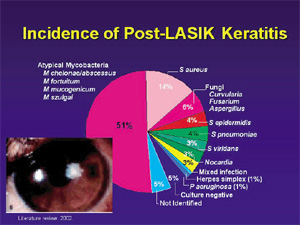 Post-LASIK keratitis is being reported more commonly, as well. A literature review reveals that more than 50% of these cases are due to atypical mycobacteria, including Mycobacterium chelonae, Mycobacterium abscessus, Mycobacterium fortuitum, Mycobacterium mucogenicum and Mycobacterium szulgai.2 (See "Incidence of Post-LASIK Keratitis" at right.) Myco-bacteria are new pathogens we're contending with in ophthalmology.

Antibiotic resistance is one of the primary causes of the increasing endophthalmitis rate specifically, and the increasing rate of postsurgical infections, in general. Among other things, surgical complications and choice of prophylactic antimicrobials also have a role.

In terms of cataract surgery, it's becoming increasingly clear that wound architecture is related to rising endophthalmitis rates, as well.3 Clear corneal incisions have become the popular choice because they enable sutureless surgery and rapid visual rehabilitation after phacoemulsification. The problem is that a relationship may exist between clear corneal incisions and a higher risk of postoperative infection. And the risk may in-crease with transient reductions in IOP.3

Several studies have shown a greater incidence of endophthalmitis with clear corneal incisions than with scleral tunnel incisions. Consider the following:

► A study in Canada4 showed a 2.6- to 3.5-fold increased risk of endophthalmitis with clear corneal incisions versus superior scleral tunnels.

This appears to be a trend, averaging a 2- to 4-fold increased risk of endophthalmitis with clear corneal incisions compared to scleral tunnel incisions.

A study on the dynamic morphology of clear cor-neal cataract incisions suggests these incisions may result in poor wound apposition and increased potential for fluid flow across the cornea and into the anterior chamber.8 This can be compared to a sucking action, drawing the periocular fluid into the eye and, therefore, increasing the attendant risk for endophthalmitis. It is critical, therefore, to have an efficacious anti-infective on board to combat the potential bacteria that enter the eye.

In the Campbell Lab, S aureus has become in-creasingly resistant to the earlier generations of fluoroquinolones. In 1993, just 2 years after the release of ciprofloxacin (Ciloxan) and ofloxacin (Ocuflox), susceptibility was 100%.11 From 1993 to 1997, we've shown a sevenfold increase in resistance to S aureus.

What can we do about resistant pathogens? Some strategies to consider include:

► Control the use of antibiotics.

► Diagnose rapidly so that we're acting against the offending pathogen.

► Employ good hygiene and sanitation practices, which have been shown to decrease epidemics as well as infections.

► Use surveillance to follow the rates of resistance and to document the pathogens causing infections.

Developing novel antibiotics, such as the fourth generation fluoroquinolones, is another option, and it's ultimately the one that has been embraced by the research and science communities. 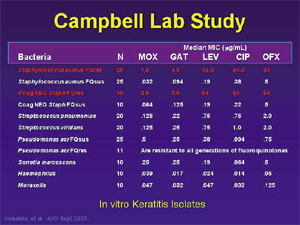 We did a study at the Campbell Laboratory that proved the efficacy of the fourth generation fluoroquinolones; it was subsequently published in the American Journal of Ophthalmology.11 We looked at the endophthalmitis isolates that came out of our laboratory and zeroed in on the resistant isolates. Our study showed that the two fluoroquinolones with the lowest minimum inhibitory concentrations (MICs) -- gatifloxacin and moxifloxacin -- are the most potent antibiotics currently available. Against keratitis isolates, our lab has published further in vitro data showing gatifloxacin is more potent than moxifloxacin against Gram-negative bacteria.

Because mycobacteria are becoming increasingly problematic in ophthalmic surgery, the New York Eye and Ear Infirmary did a study looking at mycobacteria that cause endophthalmitis and LASIK infections. This study showed that in the M fortuitum group, the fourth generation fluoroquinolones had the lowest MICs, and that in the M chelonae group, gatifloxacin had the lowest MICs.14

The fluoroquinolones were the first class of antibiotics that could penetrate the cornea and the anterior chamber to a significant degree. Ofloxacin was the gold standard in terms of penetration; it penetrated much better than ciprofloxacin. Gatifloxacin and ofloxacin seem to have similar penetration rates.15 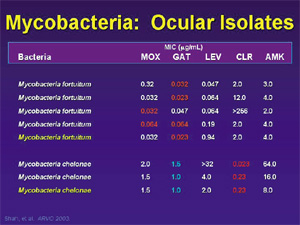 A Case of Resistance

It's become increasingly common for antibiotic susceptibility testing to report resistance, despite the fact that the patient is clinically responding to therapy. We decided to look at this scenario in rabbit models. We injected S aureus into the corneal stroma and treated with gatifloxacin 0.3%, levofloxacin 0.5% (Quixin) and ciprofloxacin 0.3%. We examined the eyes in a masked fashion and found that the gatifloxacin eyes looked much better than the levoflox-acin eyes, despite the fact that levofloxacin has a lower MIC. The gatifloxacin was effective in reducing the bacterial colony counts, and the gatifloxacin eyes were the most improved, with the least toxicity.

So, in our study, which we presented at the 2004 Ocular Microbiology and Immunology Group (OMIG) meeting, gatifloxacin 0.3% was very effective in reducing the counts of these MRSA strains.

The earlier generation of fluoroquinolones had their time, but they're no longer useful and potentially, continued use could actually decrease the usefulness by increasing resistance. We need topical antibiotics that cover Gram-positives and Gram-negatives, as well as atypicals. They have to have a high level of antimicrobial activity and kill rapidly, like the fluoroquinolones do.

Dr. Mah is an assistant professor of ophthalmology at the University of Pittsburgh, and he is co-medical director of the Charles T. Campbell Ophthalmic Microbiology Laboratory.