The consequences of infection following cataract surgery can be devastating, with 75% of patients who develop endophthalmitis having a significant risk of losing visual acuity. The same can be said for infections following LASIK, where the risk of infection may not be quite as high, but can be equally devastating.

Resistance to ocular anti-infectives is growing, and the reported incidence of endophthalmitis also appears to be increasing. A rise in infections follows rising resistance, and we're seeing that not only in cataract surgery with endophthalmitis, but also in LASIK and PRK.

Numerous studies seek to identify the cause of the increased infections and resistance. In a study of 13 cases of infectious keratitis following PRK, we noted that all were Gram-positive infections with nine cases cultured for Staphylococcus and four for Streptococcus.1 Tobramycin was the prophylactic antibiotic used in nine of those cases; trimethoprim sulfate and polymyxin B sulfate (Polytrim) were used prophylactically in three cases; ciprofloxacin was used in one case.

In a study of infectious keratitis following LASIK, as part of the American Society of Cataract & Refractive Surgery's (ASCRS's) Cornea Clinical Committee, we contacted all 8,600 U.S. and international ASCRS members by e-mail and asked them to respond to a questionnaire. Of those who responded, 56 surgeons reported 116 post-LASIK infections. These surgeons had performed an estimated 338,550 procedures, for an incidence of one infection for every 2,919 procedures. The usual suspects were cultured: 46% were staphylococcal, streptococcal and fungal; 3% were nocardial and 3% were Gram-negatives. The surprise was the large number of cases of atypical mycobacteria -- 33 cases or 48%.

This survey coincides well with the literature, showing that about half of the cases of infection after LASIK are due to Mycobacterium. Of these infections, 10 patients required penetrating keratoplasty and one went on to enucleation.

Another emerging pathogen of concern in ophthalmology is methicillin-resistant Staphylococcus aureus (MRSA). Third generation fluoroquinolones provide good coverage for Gram-negative organisms and most Gram-positive organisms. These antibiotics, however, are not effective against MRSA.2 Medical professionals or those who work in medical settings are more susceptible to these infections. About 1% of the general population would culture positive for MRSA, whereas the risk is about 1 in 10 among hospital personnel. Medical professionals who are considering LASIK must be protected against this virulent organism.

An example of this was a 45-year old nurse who complained of decreasing visual acuity and mild redness in his left eye a few days after uneventful bilateral LASIK. When I see a patient with a history of healthcare exposure who has developed a small infiltrate after LASIK, I'm suspicious of MRSA. I immediately start the patient on a fourth generation fluoroquino-lone, as well as vancomycin, and I lift the flap and scrape because of the unusual organisms we see.

In this case, because the patient was at an advanced stage, we irrigated with vancomycin under the flap daily; however, the patient continued to do poorly. The central flap necrosed and became irregular, and after a week of therapy, we elected to amputate the flap. We continued the course of antibiotics, and I painted mitomycin-C on the cornea to prevent scarring. Ultimately, this patient did well and is now 20/25 18 months later.

Numerous studies support these claims. In one study, researchers showed that the third generation
fluoroquinolones have about a 15% resistance rate to Staphylococcus epidermidis, which is the most common cause of endophthalmitis. By contrast, the fourth generation fluoroquinolone gatifloxacin (Zymar) was sensitive to all these species.3 Meanwhile, efficacy against Gram-negatives is retained, so Pseudomonas or Haemophilus are covered as well.

Another study, this one using rabbit models, showed gatifloxacin's superiority over third generation fluoroquinolones for prophylaxis of MRSA after LASIK. Five of seven rabbit eyes inoculated under the flap with 0.1 cc of 1 x 103 MRSA organisms developed infectious keratitis when treated with ciprofloxacin (Ciloxan) or levofloxacin (Quixin). No gatifloxacin eyes developed infectious keratitis.4

While evaluation of MIC values has its place, short of human studies, these animal studies are crucial to show the efficacy of these antibiotics. This is especially true when you have resistant organisms responding well clinically to fourth generation fluoroquinolones. This makes a very strong statement for the efficacy of these drugs. Although the epidemic of atypical mycobacteria may not end within the next couple of years, I predict it will be curtailed as fourth generation fluoroquinolones replace the third generation.

Corneal toxicity is one of the significant differences between the fourth generation fluoroquinolones, but it's not the only difference. Gatifloxacin and moxifloxacin (Vigamox) differ very little with respect to in vitro efficacy. They're both excellent drugs against Gram-positives and good against Gram-negatives. One very small study showed that atypical Mycobacterium was better treated with gatifloxacin, and systemic literature verifies this.5 Gatifloxacin is the only fourth generation fluoroquinolone labeled for mycobacteria.

The combination of the potent gatifloxacin molecule with a formulation containing benzalkonium chloride (BAK) provides a more rapid kill of organisms. The kill curves for gatifloxacin are much better than those for moxifloxacin because of the combined effect of the BAK and the antibiotic. If you put an antibiotic on a patient's eye 30 minutes before surgery, you will sterilize it with gatifloxacin, whereas it won't be sterilized with moxifloxacin. In a study by Rupp and colleagues using the commercial preparations of both drugs, the kill rates of gatifloxacin were compared to those of moxifloxacin against four strains of S aureus at room temperature. For all four strains, the concentrations of CFUs of S aureus were reduced faster when exposed to gatifloxacin. This difference in kill rates occurred at all measured time points -- 15, 30 and 60 minutes. 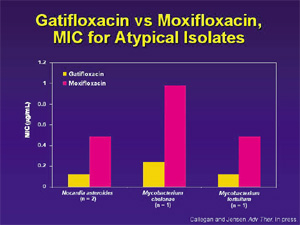 We believe, however, that intracameral gatifloxacin (nonophthalmic formulation) applied to the target tissue of the anterior chamber can eradicate or partially treat the potential bacterial inoculum that occurs during and immediately after surgery and can reduce the risk of endophthalmitis.

This assertion is supported by Snyder's rabbit model study, which has shown that as much as 320 micrograms of gatifloxacin in the anterior chamber is well tolerated without causing corneal clouding, glaucoma or retinal toxicity. Using endothelial cell culture, Snyder has shown that gatifloxacin has no toxic effects on the endothelium at concentrations as high as 400 µg/mL. Moxifloxacin exhibits toxicity at 100 µg.

To test the safety of intracameral gatifloxacin, we selected 40 patients who were undergoing routine clear corneal cataract surgery. At the conclusion of surgery, we injected a solution of 100 µg of gatifloxacin in 0.1 cc into the anterior chamber through the paracentesis site. The solution was formulated from intravenous Tequin (the systemic form of gatifloxacin) and diluted to obtain 0.1 mL or 0.1 µg in 100 µg of gatifloxacin. At 1 week post-op, all eyes were quiet with no significant change in ultrasonic pachymetry, no visible retinal pathology and no endophthalmitis.

We concluded that intracameral gatifloxacin appears safe in human eyes at a dose of 100 µg and that additional studies are indicated. When we put 100 µg into the anterior chamber -- about 50 to 100 times more than can be achieved with topical dosing -- an extraordinarily high level of protection is provided in the immediate post-op period.

Subsequently, we've shown in rabbit models that by supplementing intracameral gatifloxacin with a topical dose of gatifloxacin, you can maintain that dose at a higher threshold for a significantly longer period of time. This combination will be a nice adjunct in preventing endophthalmitis.

Dr. Donnenfeld of Ophthalmic Consultants of Long Island is co-chairman of Cornea and External Disease at Manhattan Eye and Ear, and associate professor of ophthalmology at New York University Medical Center.