Glimpsing the Future of LASIK With ESP
Testing the Efficiency, Safety and Predictability of IntraLase vs. conventional microkeratomes.

Study cohorts were similar for all flap modalities, which were categorized according to mean preoperative spherical equivalent and mean preoperative pachymetry. After surgery, we evaluated flap thickness, degree of loose epithelium, incidence of device failures, change in best-corrected visual acuity (BCVA) and occurrence of buttonhole or torn flaps. This article presents some of our findings.

Most of us will agree that the riskiest aspect of LASIK is creating the corneal flap. Ideally, we want to use a device that produces flaps of predictable size and thickness. To evaluate the reliability of two mechanical keratomes and the IntraLase FS laser, we compared target and observed flap thickness in our study population. Target thickness was 130 µm for the CB, 180 µm for the Hansatome and 130 µm for the IntraLase FS laser. With a mean standard deviation of 14 µm, the IntraLase FS laser created a tighter range of predictably thinner flaps than the CB and the Hansatome, which had mean standard deviations of 26 µm and 29 µm, respectively. (For more details, see "Results: Flap Thickness.") 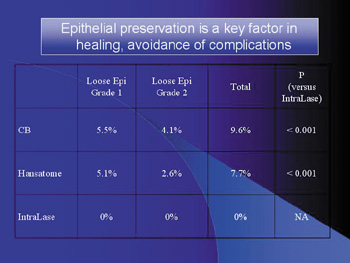 Preserving epithelial integrity is important for successful post-LASIK healing. In our study, we used Daniel S. Durrie, M.D.'s four-grade system to categorize the degree of loose epithelium in our patients.

None of our patients fit criteria for Grade III (loose epithelium in three quadrants) or Grade IV (complete slough). However, as illustrated by the chart on this page, 9.6% of CB patients, 7.7% of Hansatome patients and 0% of IntraLase patients showed Grade I (one quadrant) or Grade II (two quadrants) loose epithelium. These results suggest that patients treated with the IntraLase FS laser may heal faster, reducing their risk of developing diffuse lamellar keratitis, epithelial ingrowth and flap striae. I've even used the IntraLase FS laser to treat 26 map-dot fingerprint dystrophy patients (not included in this study cohort) without compromising their epithelial integrity. 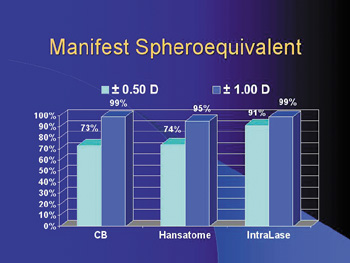 Since this study, I've modified my preoperative routine for IntraLase patients. Placing patients on a regimen of preoperative ophthalmic steroids and antibiotics has significantly reduced the incidence of 1-day post-op inflammation and edema. As a result, my 1-day post-op 20/20 rates have increased to about 78%. 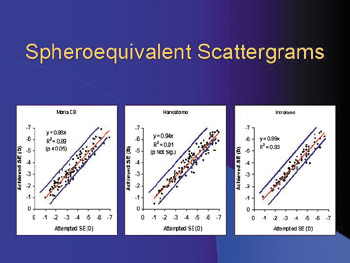 We also found that our Hansatome and CB patients had a statistically significant higher incidence of induced cylinder than our IntraLase patients. We believe that IntraLase's cylinder neutrality makes this a better tool for wavefront treatments.

Our research shows that the IntraLase FS laser offers more predictable flap thickness, better epithelial preservation, refractive predictability and neutral cylinder outcomes. During our study, we noted no significant difference in the distribution of changes or mean change in best spectacle-corrected vision. We experienced no device failures and noted no buttonholes or torn flaps among patients treated with the three devices.

This is one of a series of articles recapping presentations given at the IntraLase booth during the 2003 meeting of the American Academy of Ophthalmology.