The following article was adapted from a panel discussion at the American Academy of Ophthalmology Annual Meeting, November 2003, Anaheim, Calif.

Calvin Roberts, M.D.: We all have individual approaches in using anti-infectives to protect against infection after surgery. Many considerations factor into these decisions, including our own professional experiences.

One thing we consider is the ubiquitous mycobacteria, which cause more than half of post-LASIK infections. Gatifloxacin (Zymar) has been a real blessing because it's the only ophthalmic antibiotic that has good coverage against mycobacteria.

Another issue is whether an antibiotic should have a preservative. I think it absolutely has to. The preservative guards against contamination, increases permeability, keeps the drug stable and offers an added antimicrobial effect.

With all these things in mind, how do we use anti-infectives to get the best surgical outcomes? I give my patients 3 days of preoperative antibiotics to sterilize the ocular surface. This gets high levels of drug in the eye to kill any potential inoculation during surgery.

Dr. Arbisser, how do you manage antibiotic prophylaxis for your cataract patients?

Lisa Arbisser, M.D.: I don't start my patients preoperatively on gatifloxacin; they get a dose when they come into the OR. Next, they get a pledget soaked with antibiotic and the dilating drops. It stays pressed against the globe for at least 20 minutes before surgery. 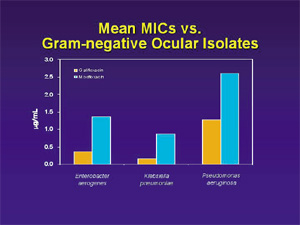 Of course, I pay attention to external disease and make sure that my patient's ocular surface is clean ahead of time. We do the usual prep -- a drop of tetracaine first so the patient can tolerate the povidone iodine (5% Betadine) on the ocular surface, followed by 2% lidocaine jelly. After ascertaining that the wound is watertight, I use a drop of 5% Betadine diluted down to 1% and put a drop on the globe immediately after undraping the patient, followed by gatifloxacin. Before my patients leave the surgical center, they get a total of five drops of gatifloxacin, about every 5 to 10 minutes. At home, they use gatifloxacin every 3 hours while awake the first day, and then q.i.d. for a week. For the rare peribulbar patient, I put a piece of tape on the lid that splints it shut. They can lift it with a handle to put in the drops as often as a topical patient does.

Frank A. Bucci Jr., M.D.: The pledget is a very viable idea -- it can deliver a lot of the drug. I use it as a cocktail with my NSAIDs and with the dilating drops, and I use it alone. It delivers levels comparable to using an antibiotic four times a day for 2 days.

Dr. Roberts: Do we have any data about how this compares with pre-op antibiotics for bacteria on the lids and lashes?

Dr. Bucci: For cataracts, I use gatifloxacin 2 days pre-op and four times a day for 7 days post-op. In my recent studies, we tested pulsing five times in the hour before surgery, four times a day for 2 days by itself and a combination. Levels for pulsing before surgery are dramatically higher than the 2-day preparation. But the combination gives you almost another 50%. And so I use the 2-day approach to soak and get into the lashes and the lid margin.

I also did a study of preoperative antibiotics and lid scrubs. Lid scrubs combined with pre-op antibiotics killed more than twice the bacteria of antibiotics alone. 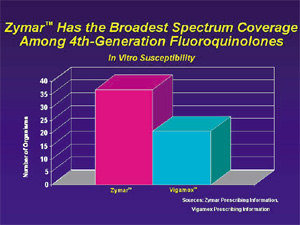 Karl Stonecipher, M.D.: My practice is pretty much all refractive, but I haven't had an infection after a refractive procedure. Three days before surgery, I use prednisolone and gatifloxacin. I do this for some of the reasons that were mentioned and also because I think it helps patients postoperatively. I clean the lids with Betadine prep. And I use gatifloxacin topically during surgery because Donnenfeld and others have shown how well it penetrates with the microscope's heat.

Post-op, I'll let my patients go home, and I'll give them a zolpidem (Ambien) to sleep for 3 or 4 hours. They'll start using gatifloxacin every 1 to 2 hours while they're awake because I want to get a high concentration of the drug in the eye and in the flap. And then I go to a four-times-a-day dosing regimen for 2 weeks. Gatifloxacin has been effective in terms of patient comfort and complaints.

Dr. Bucci: For LASIK, a lot depends on an intact ocular surface with no epithelial defects with the flap. I do 2-day lid scrubs and use gatifloxacin four times a day the day before surgery.

Gatifloxacin is effective against the atypical mycobacteria, and it gives a great depot effect in the cornea to the depth of the flap. Patients use gatifloxacin in the morning before they arrive, we do the surgery, and they get gatifloxacin immediately after the procedure. They use it four times a day for just 4 days. I've never had an infection with a LASIK patient.