Does IntraLase Make Sense?
This surgeon responds with an unequivocal "yes" based on his experience and that of others now using the IntraLase femtosecond laser to make LASIK flaps.

I f you're in the market for new technology, you'll likely ask yourself:

1. Is it better technically than what I now have?

2. Will it mesh with other technologies in my office?

3. Does this technology makes sense financially?

4. Will my patients accept it and be willing to pay a premium for its benefits?

My partners and I asked ourselves these questions and more before obtaining the IntraLase femtosecond (FS) laser. In all aspects -- clinical, logistical, financial -- the IntraLase unit has brought positive results. If you've been considering a similar move, our experience may be of some interest to you.

Numerous studies have elucidated important advantages of the IntraLase FS laser vs. mechanical microkeratomes in terms of efficacy and safety.

Significant flap complications are all but gone. Some of the complications you worried about when removing the microkeratome during the procedure -- perforations, incomplete or irregular flaps, buttonhole flaps, epithelial defects -- just don't occur anymore.

Why? Simply because you don't have a mechanical microkeratome slicing across the cornea with compressive force and an attendant risk of epithelial insult. The only epithelial problems you might see are those created iatrogenically if instead of lifting the flap you miss the plane and go beneath the epithelium. This is rare, but it can happen.

The IntraLase FS laser yields further clinical advantages. Its precision and predictability in flap thickness and size are unmatched as evidenced by a study I did of 69 eyes when I first obtained the IntraLase FS. Personally, I like thin flaps because I want to preserve as much posterior stroma as possible for the ablation. So I set the laser for 100 µm and averaged 103 µm +/- 10.4 µm -- remarkable results. This and other studies show that the IntraLase FS laser produces narrow standard deviations and tight ranges of corneal thickness and sizes.

I also like the IntraLase machine's planar flap. We've seen reports whereby a clinician performs wavefront measurements and an IntraLase flap one day and the next day the wavefront readings are unchanged. You're unlikely to see that happen with a regular microkeratome.

The mechanical microkeratome's flap invariably is thinner in the center, which is why you get buttonholes. The IntraLase laser's planar flap, on the other hand, has a uniform thickness. This means you don't have to deal with a meniscus shape, which must be replaced perfectly lest you induce wavefront errors, namely, coma.

A further clinical benefit is that the IntraLase diminishes residual astigmatism. Not only do you get reduced irregular astigmatism; you also see decreased residual second-order astigmatism by a factor roughly of three.

In terms of technique, the IntraLase FS laser permits considerable versatility. You can put your hinge wherever you like. I like to use temporal hinges in hyperopes and nasal ones in most of my myopes (unless they have a lot of with-the-rule astigmatism, in which case I'll put the hinge superiorly). If you prefer a thicker flap, by all means use a thicker flap. But remember: One nice thing about a planar flap is that a 100-µm flap actually handles more like a 130-µm or 140-µm flap because you don't have that thin center. So you can go with thinner flaps with the same handling characteristics as thicker ones.

An added plus is that our enhancement rates are diminished largely owing to the IntraLase laser. Using both the Alcon LADARVision and the VISX Star excimer laser systems, our enhancements are down to about 6% from previous levels of 10% to 15%. 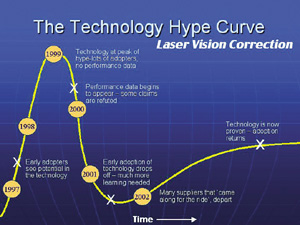 Use of the IntraLase FS laser has altered our patient flow, but our staff and surgeons have established a new routine and adapted nicely.

Here's how we work it. Say we're using the LADARVision system and the patient is having standard rather than custom LASIK. Once his pre-dilated image is captured, he is brought into the next room where we do the IntraLase flap. We then have him wait 10 minutes -- which he would have to do anyway because he has to dilate -- before he undergoes the standard LASIK procedure. A VISX patient requires no dilation but still must wait an extra 10 minutes after the flap is created to allow the bubbles created by the IntraLase to dissipate and to allow for uniform hydration before undergoing the ablation.

Nationwide, we've barely scratched the surface of the patient population waiting to undergo LASIK. The key bottleneck holding people back seems to be a continued expectation of better technology. Well, we now have that technology. We have IntraLase and we have custom ablation. I expect to see the bottleneck open up in the coming months and years as patients recognize the advanced technology currently in clinical use.

Just from our experience, when we tell patients we don't use a blade anymore, we can practically see the relief on their faces as they foresee a less-frightening procedure. Generally, most are willing to pay a premium for the all-laser procedure.

Financial matters naturally factor into the decision. Clearly, you can charge for new technology. For this reason, I'm happy to share our office's numbers.

For simplicity, let's say we do 100 cases per month. If our average incremental income per case is $330 and our average incremental cost per case for incorporating the IntraLase FS laser is $100, that's $220 profit per case. Multiplied by 100 cases per month, that's $22,000 per month or $250,000 a year in additional profit just from incorporating and charging for the new technology. And that's just for the IntraLase. If you add in the incremental profit from custom ablation, the extra profit approaches $500,000. And all you've done is incorporate new technology.

Does it make sense?

For our clinic, the arguments in favor of obtaining the IntraLase femtosecond laser have been clear-cut. We now create better flaps. We get better clinical outcomes. We encounter fewer flap-related complications (almost none, actually). Our enhancement rates have decreased. And our bottom line has enjoyed a healthy addition. We search in vain to think of a downside.

Dr. Gordon is a partner in the Gordon Binder Vision Institute, San Diego.

This is one of a series of articles recapping presentations given at the IntraLase booth during the 2003 meeting of the American Academy of Ophthalmology.