The enVista toric MX60ET IOL offers benefits for both patients and surgeons. 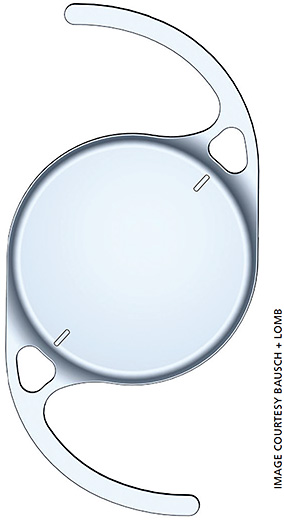 Unfortunately, surgical lenses have not been known to correct that low an amount of astigmatism. With the Bausch + Lomb enVista toric MX60ET hydrophobic acrylic IOL, “That’s not the case anymore,” says Jeffrey Whitman, MD.

“There are always patients who are hyper-sensitive to their clarity of vision, so you can never really rule out that a lower number diopter might not matter to someone,” says Dr. Whitman, chief surgeon at Key-Whitman Eye Center, a network of offices in the Dallas-Fort Worth metroplex. Studies show that patients with an astigmatism as small as 0.75 D can expect at least some loss of vision quality.

The Bausch + Lomb enVista toric MX60ET, which was introduced to the market this past winter, offers a glistening-free optic, provides improved material properties (including a StableFlex technology that allows the lens to open quickly after implementation) and delivers enhanced optic recovery during the surgery.

Featuring a broad range of cylinder powers, the enVista toric is also the only domestically available FDA-approved IOL to correct less than 1 D of astigmatism at the corneal plane. Dr. Whitman believes that will have a major impact on the industry and patient care.

“It’s very difficult to demonstrate to the FDA that a number of patients have been successfully treated for that small amount of astigmatism,” he says. “We’ve known that it matters; it’s just that we didn’t have lenses to correct it until now.”

Changes from the MX60E to the MX60ET have been slight from a materials perspective: They include an increase in the percent by weight of the poly(ethylene glycol) phenyl ether acrylate and a small decrease in the weight of the styrene component. However, Dr. Whitman and Dee Stephenson, MD, surgeon at Stephenson Eye Associates, Venice, Fla., say the impact has been significant for both patients and surgeons.

For instance, through the Trusight aspheric optic design, the IOL provides better image quality and depth of field, as well as the potential for increased resistance to scratches and abrasions that may occur during loading and surgical manipulation, says Dr. Stephenson, the first surgeon globally to implant both the MX60E and the MX60ET.

During surgical procedures, the new optic’s time-to-open particularly stands out, a result of the StableFlex technology. “It opens in about 25 seconds as opposed to 90 seconds,” Dr. Stephenson says. She and Dr. Whitman also credit the IOL’s shape, durability and stability with helping procedures to progress more quickly, and with better results.

“The lens is a very hard material that avoids scratches; you can’t tear it,” Dr. Stephenson adds. “It also resists abrasions, and that allows for a more pristine optic as well.”

In addition, because of its equal power from center to edge, the lens is less dependent on placement and positioning in the eye, according to Dr. Stephenson. “This lens is more stable than others, and it’s evident,” she says. “It is not as likely to rotate. Its square edge reduces lens epithelial cell migration so that you don’t have to laser as often.”

Dr. Whitman, who is currently trialing the product to test its stability and rotational ability, adds that the IOL has a stable fit in the capsular bag when a cataract is removed, which B + L officials attribute to the step-vaulted AccuSet haptics that allow for extensive interaction with the bag, which aids in securing lens position.

“There’s neutral asphericity, so if the lens gets decentered or tilted, you’re not likely to see profound change in vision like you might with other lenses,” Dr. Whitman says. “The lens even allows for some irregularities in terms of centration. It also hardens nicely, doesn’t scratch or dent easily — even if you grab it wrong during surgery — it’s very forgiving that way.”

“These patients get an increased depth of field, so they are seeing better in the intermediate — with their phone, their tablet and their other devices,” Dr. Stephenson says. “These patients can now answer their phones or be on their laptops without wearing glasses. With our world as digital as it is, this is a great bonus for patients. The lens is also a great option for post-refractive patients, which there are so many of.”

Although he can’t disclose results of his ongoing trial, Dr. Whitman says he anticipates offering this IOL to an increasing number of patients who should see an expanding array of benefits.