Industry Insider is a timely chat with an ophthalmic industry thought leader. 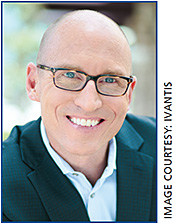 In August 2018, Ivantis received FDA approval for its Hydrus Microstent. The Hydrus, which is about the size of an eyelash, is implanted in the Schlemm’s canal during cataract surgery to reduce IOP.

Dave Van Meter, president and CEO of Ivantis, joined in 2008 and helped shepherd the Hydrus through development, clinical trials and launch. Before joining Ivantis, he held several roles at Abbott Vascular, including director of U.S. marketing and vice president and general manager of coronary technologies.

Ophthalmology Management: In May, you announced the 3-year results from Hydrus’ FDA clinical trial, which found Hydrus glaucoma patients demonstrated significant long-term reduction of invasive major surgeries. After that success, what is next for the Hydrus?

Dave Van Meter: I believe we are, at least so far, the only company in the MIGS space to show the type of significant reduction of severe major surgeries for their clinicians’ patients at 3 years out. I also think we are the only MIGS company to date to have published any sort of efficacy data going out to 3 years or more in a pivotal trial. So it might not surprise you to hear that what’s next for Hydrus is more data.

As a company, we have a reputation for valuing data, and I believe the field has come to rely on us for the highest level of evidence. What’s unique in our pivotal trial for the Hydrus is we are tracking efficacy on patients for up to 5 years, and we are the only company doing that with a MIGS trial. The data for our 4th year of study was presented in February at the annual American Glaucoma Society meeting.

In the glaucoma space, we feel providing this level of continued evidence is important, as it’s a chronic disease that people typically live with for the rest of their lives. We want our evidence to go a long way, and we think that sets us apart in the MIGS field.

OM: Where does the Hydrus fit in the glaucoma and MIGS armamentarium?

DVM: There are various stages of glaucoma, ranging from early stage to advanced end stage. In the U.S., the Hydrus is labeled for cases of “mild to moderate glaucoma,” which is the lion’s share of glaucoma patients in this country.

More than 80% of the global MIGS market is in this country, and we believe the Hydrus is the most effective such treatment. The market is realizing that surgeons only have one shot to take care of glaucoma patients undergoing cataract surgery, so if you’re opening up a patient’s outflow channel, then you owe them the best option. And we believe the Hydrus’ efficacy speaks for itself.

OM: Does Ivantis have any other devices or therapies in its pipeline?

DVM: We’re not currently planning to iterate on the implant design of the Hydrus, since we believe the data on its efficacy shows we got the design right the first time. We do have plans to create an ergonomically enhanced injector for the Hydrus, which is being created with the help of human factors studies Ivantis has conducted.

Additionally, we are planning on new indications for the Hydrus — we have a strategy in place to pursue FDA clearance for it to be used in standalone glaucoma cases, without the patient needing to undergo cataract surgery. Our ongoing SUMMIT study is currently investigating this use.

OM: You have led Ivantis since 2008. How has the company evolved since then?

DVM: Well, it’s been a long road to getting the Hydrus approved in the U.S. In 2008, I was involved in the beginning of the company, when Ivantis began in southern California and a very early prototype of the Hydrus was handed off from our incubator company. The first 2 to 3 years were the classic “entrepreneurial start-up”; the company’s first office was my upstairs bedroom.

After that, we transitioned to more of a clinical research organization — we began our U.S. trial and global registry, and had other clinical trials pursued in parallel. After that, there was a period where we became more of a regulatory organization as we were pursuing formal regulatory approvals for the Hydrus and assembling our commercial organization. In the last 18 months, we have become a different entity again, as a full-scale enterprise, with a very different energy. We’ve grown exceptionally quickly and we’ve expanded into a new building.

Each stage along our journey has been dominated by different kinds of personalities, based on the company’s needs. So, the key for us is being able to let Ivantis morph into whatever form it needs while retaining the elements that have worked for us so far. I feel we have done a very good job of that. OM