Your glaucoma armamentarium includes medications and surgical options, but can you also help stave off the loss of your patient’s vision by supporting the cells on which the optic nerve relies?

Such is the basic idea underpinning GlaucoCetin, a “medical food” from Guardion Health Sciences. Launched in November 2018, GlaucoCetin is formulated to support and protect the mitochondrial function of optic nerve cells in patients with glaucoma. This medical food may help slow and potentially reverse mitochondrial dysfunction in the optic nerve cells of glaucoma patients, potentially delaying vision loss. 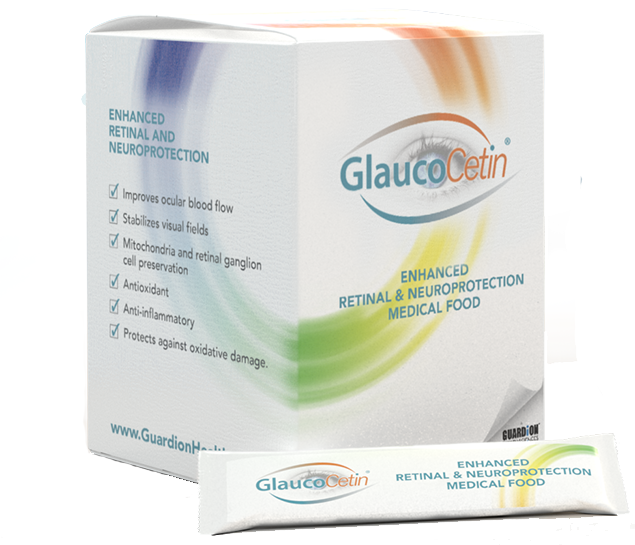 “Instead of waiting to treat glaucoma when optic nerve damage is already present or trying to preserve remaining vision when the glaucoma has become advanced, perhaps we can deal with mechanisms to prevent neurodegeneration or, when neurodegeneration is progressing, to slow it down,” says Dr. Ritch.

A medical food is neither a drug nor a supplement.

The FDA quotes the Orphan Drug Act to define a medical food as “a food which is formulated to be consumed or administered enterally under the supervision of a physician and which is intended for the specific dietary management of a disease or condition for which distinctive nutritional requirements, based on recognized scientific principles, are established by medical evaluation.”

To understand the idea behind GlaucoCetin, understand that glaucoma is a brain disease, writes Dr. Ritch in literature about GlaucoCetin. Glaucoma, he writes, is not one disease but the final common pathway of many disorders, resulting in retinal ganglion cell death and loss of vision. Some of these disorders, such as exfoliation syndrome, which can present with very high pressures characteristic of trabecular blockage or dysfunction, are primary eye diseases, but the visual damage they cause is at the level of the optic nerve, he notes.

Mitochondria, he writes, die before the nerve cells die in glaucoma. “If the mitochondria can be protected, then the nerve cells will maintain their function for a longer period and the disease progression slowed. The same argument extends to oxidative damage and inflammation.”

A small, randomized, double-masked trial of GlaucoHealth found positive results in helping patients with glaucoma. In a trial of 14 patients, investigators, who included Dr. Ritch, gave one group placebo, the other GlaucoHealth. Patients were tested with visual fields, OCT and retinal metabolic analysis (RMA) at baseline, 1 month and 3 months after randomization. RMA measures adjusted mitochondrial flavoprotein fluorescence (aFPF) and its average curve width (ACW), which are markers of mitochondrial oxidative stress, according to the poster describing the study at the 2018 American Glaucoma Society Meeting.

Investigators found a significant decrease in optic nerve aFPF and ACW from baselines to 1 month in the patients given GlaucoHealth. “GlaucoHealth,” they stated on the poster, “reverses mitochondrial dysfunction and may be neuroprotective in glaucoma. This finding serves as a proof-of-concept for future trials testing the neuroprotective effect of micronutrient combinations in glaucoma.”

George Reiss, MD, MS, managing partner, Eye Physicians and Surgeons of Arizona, feels GlaucoCetin could help glaucoma patients. There are reasons to think the product “would help individuals who have optic nerve damage. It makes a lot of sense that these patients could benefit from the nutrients in this formulation,” he says

Dr. Reiss offers GlaucoCetin especially to patients who have optic nerve damage in the face of otherwise acceptable IOPs. “We have little else available to address non-pressure-related causes of premature axonal degeneration.” More than 50 of his patients currently take GlaucoCetin. “At least hypothetically, it does make sense to provide these vital nutrients to the mitochondria of axonal cells that make up the optic nerve and parts of the retina. Those axons rely on their mitochondria for function,” he says.

After reviewing the GlaucoCetin formulation, he says that were he suffering from optic nerve damage, “I would take it myself.” OM