When patients go to their pharmacy to pick up their prescriptions, they expect that medication to be there. They don’t expect — nor want to address — being told their insurance won’t cover a branded medication — just the generic version — or that the insurance company needs a prior authorization before the pharmacy can release the medicine. Those scenarios result in pharmacy callbacks — when a pharmacist calls the physician’s office to work through the issue.

Seeing to these issues can be incredibly time-consuming. The practice bears the onus of identifying what medications are on an insurance plan, filling out a preauthorization form and submitting it to the insurer. The practice is often charged with follow-up as well, confirming the insurance company received the request, that the request was authorized and finally ensuring the pharmacy has received the approval. The process can take several days, which may be problematic depending on how urgently the patient needs the medication. One study (The 2018 Impact Report: Prescription Price Transparency, from Surescripts) found clinicians spend 2 hours weekly consulting with patients about medications and costs, 1.7 hours working on prior authorization forms and an hour working to understand drug pricing for patients.

A notable exception are retina physicians, who often “use what’s called ‘buy-and-bill,’ where they use very expensive medications they’re forced to buy, and they take on the financial responsibility of having inventory,” said Darrell E. White, MD, Skyvision Centers in Westlake, Ohio.

Needless to say, pharmacy callbacks can become a costly and burdensome process for the practice.

Some patients may have difficulty understanding which medications are covered and may not question a pharmacist when their prescription is changed from a name brand to a generic. In the interim, the physician’s practice personnel has received a call, researched the request and alerted the pharmacy if the requested change is approved or not.

“Pharmacy callbacks are unfortunately a feature of managed care formularies and closely tied to step therapy and other types of prior authorization,” said Tal Raviv, MD, FACS, Eye Center of New York. ”The insurance payers place hurdles on non-formulary or expensive medications to control cost — at least that’s the stated reason. Pharmaceutical prices have skyrocketed recently, and not just brand names but also generics in many cases and branded generics as well.”

EHR systems use an electronic prescription database that allow physicians and practices to view each medication a patient has been prescribed. But, the downside to these systems is that there is scant, if any, pricing information on the prescribed drugs, Dr. Raviv noted.

Another issue: if a patient has an acute infection (eg, viral conjunctivitis), “I’m going to prescribe Zirgan (ganciclovir, Bausch + Lomb), which is incredibly effective, but equally incredibly difficult medication to source because the overwhelming number of pharmacies don’t stock it,” Dr. White said. “Plus, it’s almost always a non-tiered medicine. It’s not that it’s not Tier-1 or Tier-2, it’s just not tiered at all.”

WHAT THE DATA SAYS

According to a recent study by Smith and Sprecher in the Journal of the American Pharmacists Association, the majority of prescriptions that needed physician clarification from the pharmacy were new, not refill, prescriptions (74% vs. 26%, respectively). Unfortunately, that same study found new prescriptions transmitted by “e-prescribing” result in a pharmacy callbacks four times more often than faxed prescriptions and twice as often as written prescriptions. The leading prescription issues for pharmacies include prior authorizations (37%), formulary issues (26%) and lack of clarity about refill status (11%); clinical reasons include needing clarification for dosage issues (5% to 21%), patient instructions (8% to 10%) and allergies or harmful drug interactions (4% to 11%), according to the study.

Mail-order pharmacies often have similar issues. Scant data has been published on the relationship between pharmacy callbacks and pharmaceutical pricing, however.

Eye-care practitioners in the United States are at a significant disadvantage, as “we have zero detail on a drug’s actual retail price or the patient’s actual price (copay/deductible) — or for that matter, whether there is need for prior authorization or for step therapy,” Dr. Raviv said.

“There are more than 1 million prescribers in the United States, all of whom have to prescribe a medication first (and we’re blind to the price to the patient), let the pharmacy adjudicate it, then determine the price, deductible or a need for prior authorization or step therapy,” Dr. Raviv said.

A non-tiered medication leads to an “instant callback” from the pharmacy noting a pre-authorization is needed, Dr. White said. “It’s analogous to saying you need a pre-authorization for a tourniquet,” he quipped. “You’ve got a patient who has an acute inflammatory disease or a corneal ulcer where a fourth-generation fluoroquinolone is necessary. But, if you don’t have access to their insurance formulary, which you almost never do, you have to decide if your battle’s going to be about which fourth-generation fluoroquinolone you’re going to use.”

Dr. Raviv said there is a simple solution — require complete pricing information on the prescriber’s e-Rx screen. A recent roundtable from formulary data improvement company BenMedica (https://tinyurl.com/yyru5nhu ) supported this concept as well. Seven physicians across five separate specialties determined pharmacy callbacks are the most frustrating part of the prescribing process, formulary data is often ignored, physicians care more about drug cost to the patient than the payer and physicians tend to have drug favorites and are unlikely to seek alternatives without proven benefits.

Some diseases have many treatment options and can create more hurdles for the physician practice, Dr. Raviv said.

For example, in dry eye there are two commonly prescribed medications: Restasis (topical cyclosporine 0.05%, Allergan) and Xiidra (lifitegrast, Novartis). According to website GoodRx.com, the average retail price of Restasis is around $686, and Xiidra is around $629. Through the website, the drugs can be purchased for $560 and $525, respectively. In this example, Dr. Raviv said it’s likely only one drug will be preferred by the patient’s insurance. “So it’s likely 50% of the time, we’re getting a callback from the pharmacy telling us which one is covered or not,” he said. 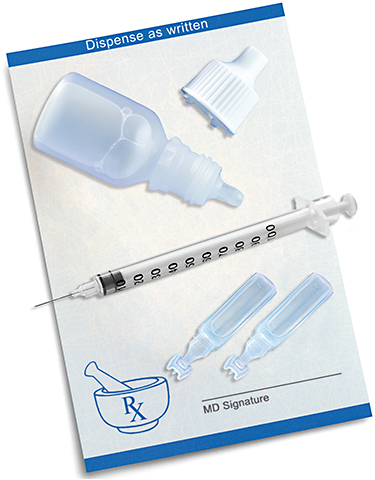 In dry eye cases, Dr. White said physician practices are likely to have “an interaction with the pharmacy, or the insurance company, or the PBM, or some combination of all three” as the drugs’ expense makes them non-Tier 1.

Additionally, some insurance plans may require more information or request copies of medical records before allowing a prescription to proceed. For some practices, additional staff may be necessary to handle the calls between pharmacies and insurance plans. One survey found the threshold of a copay difference needed to change a prescription hovered around $50; if the current medication is efficacious, physicians were unwilling to change.

The same BenMedica survey also found physicians want to know the approximate cost of either the copay or the drug price during the prescription process. Finally, according to the survey, while only formulary levels are valuable, a tier level or copay information would provide physicians with more useful data upon which to make their prescribing decisions, bearing in mind the chronicity of the disease and a patient’s financial needs.

If patients are alerted about why particular medications were chosen over others and that the chosen medication may not be the least expensive, they will be better prepared when they get to the pharmacy, Dr. Raviv said. Once the difference in cost between the name-brand and generic is explained, if the patient still wants the name brand, the practice can alleviate callbacks by including “dispense as written” on the prescription (if using an electronic system, noting “brand only” or “generic acceptable” can work as well).

Industry has its own suggestions for tackling callbacks.

First and foremost, she said, inform patients during the initial appointment why they are being prescribed a particular product and how it can help achieve the desired outcome. The physician should also mention details such as the cost when the information is available and if the product has a co-pay assistance card.

Second, include all state required language such as DAW1 on all prescriptions to help minimize changes at the pharmacy and better communicate the treatment plan directly to the pharmacist. Also consider completing a prior authorization request form in advance to describe the prescription’s clinical necessities. This can often help in obtaining approval of the product.

Finally, “ensure all individuals involved in the patient journey are aligned with the desired treatment protocol, including both staff and pharmacy. This helps ensure consistent communication to the patient about the importance of adhering to their prescribed treatment regimen,” Ms. Barnard said.

Practices that understand all the variables that lead to these calls are likely “to save hundreds of hours of frustration from ‘callbacks,’” Dr. White said. “The best way to deal with callbacks is to not have them happen.”

While pharmacy callbacks are inevitable, they do not have to be pervasive. As these experts said, preparation on the front end will reduce the burden on the back end. OM