When ArcScan introduced the Insight 100 in 2016, this ophthalmic imaging device represented a notable step forward in visualizing the eye’s anterior segment. Three years later, ArcScan has enhanced the device to provide surgeons with even more capabilities.

ArcScan Insight 100 improvements include fine tuning the ultrasound transducers (one for cornea specific and the other for deeper scans) and the software that controls the transducer path along the arc, according to Barry Schafer, vice president of marketing and sales at ArcScan. Other enhancements include improvements in the EyeSeal design, upgrades to internal hardware components and the ability to do iris tracking between each meridian scan. Additional advances: automatic glaucoma and keratoconus report generation, a DICOM interface plus a new headrest design. 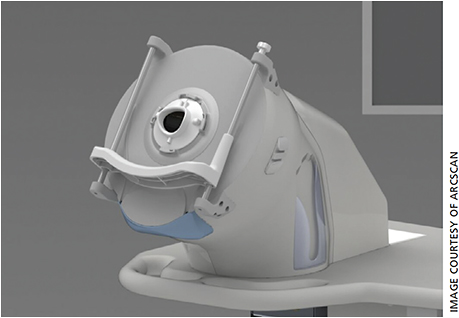 Upgrades to software and the ultrasound transducers improves the geometric correction of the ultrasound beam, resulting in more sensitive epithelial mapping, says Mr. Schafer. Further, the ability to detect SMILE pockets has been improved, as well as detection of LASIK flaps created up to 10 years ago.

The ArcScan’s single-use EyeSeal eliminates the need for ultrasound gel and traditional contact with the ultrasound probe. The company, according to Mr. Schafer, has modified the shape of the EyeSeal, which now has a wider flange. This improved the seal for patient anatomy and reduced imaging seat time.

Upgrades to internal hardware components improved the ArcScan’s reliability, consistency of scanning and the ability to align the device along the corneal apex, says Mr. Schafer.

The new iris-tracking capability allows for patient eye movement and improves image quality and measurements. When scanning multiple meridians, each scan references the iris, not the pupil.

The ArcScan Insight 100 differs from optical coherence tomography (OCT) in two ways, notes Corby Ropp, DO, Commander, United States Navy, Naval Medical Center, who began using the device in August 2018. He uses the device for corneal imaging either for cornea anatomy (eg, scars) or epithelial mapping capability, anterior segment glaucoma reports and anterior segment imaging with or without the capsule.

First, while the Insight 100 is similar to OCT in that both technologies can provide corneal images, anterior chamber depth measurements and epithelial mapping, the ArcScan differs from OCT by using immersion. This negates the contribution of the tear film to the epithelial maps, he explains.

Second, the ArcScan can image behind the iris, clearly visualizing the sulcus space. This has potential applications for implantable collamer lens surgery, including sizing and verifying correct footplate positioning, Dr. Ropp says. While traditional ultrasound biomicroscopy can also visualize this space, the ArcScan resolution and repeatability are “exceptional” (0.12-μm repeatability for measuring sulcus-to-sulcus), he notes.

“The ability to measure the entire lens capsule is quite remarkable as well, and offers potential for measuring effective lens position as it relates to IOL power predictions,” he says.

Overall, says Dr. Ropp, the ArcScan Insight 100 represents “a very unique device in its ability to perform multiple challenging functions exceptionally well.” He calls it a great tool for any refractive surgery program, particularly if they are implanting ICLs or pursuing research. OM