For decades, prostaglandins have been the primary first-line topical medication to treat ocular hypertension and glaucoma, with a second (and sometimes third) topical added when the disease progresses or IOP can no longer be controlled.

In 2017, however, the FDA approved the new topical treatment Vyzulta (latanoprostene bunod, Bausch + Lomb). Although Vyzulta is classified as a prostaglandin, it has a second, nitric oxide component.“Prostaglandins will remain first-line therapy in those who are appropriate candidates, but for patients with light-colored eyes or who are pregnant or have a history of macular edema, prostaglandins may not be appropriate,” says Constance Okeke, MD, Norfolk, Va.

Aqueous suppressants are used “because we have to, but most of us would agree that getting fluid out of the trabecular meshwork (TM) is ideal,” says Nathan Radcliffe, MD, New York. “The dual mechanism of action in Vyzulta makes it a great step in terms of treating glaucoma in a more ideal fashion.”

And because this particular agent works on the TM, “it might make sense that before a patient has progressed to a severely damaged TM, or before they’re on four to five different medications, this may be a better option,” says Jason Bacharach, MD, Petaluma, Calif. “We don’t know how it would work in the long-term for patients with severely damaged TM, but, theoretically, it makes sense to me that Vyzulta’s dual mechanism of action might work better in earlier stages.” 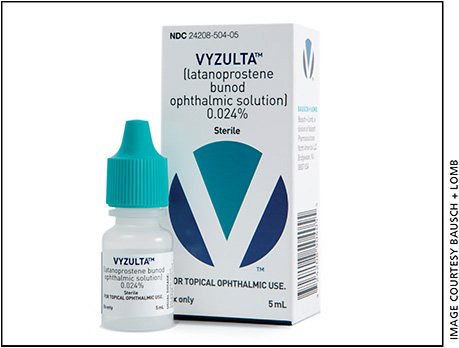 Nitric oxide (NO) may have benefits that go beyond the TM, according to Dr. Radcliffe. The bunod modification “allows the molecule to cleave onto the latanoprost acid in NO,” he explains. NO works through the cyclic guanosine-3’,5’-monophosphate (cGMP) mechanism to relax the TM. “This makes Vyzulta a dual-outflow agent, one that increases outflow through the uveoscleral pathway, as well as through the trabecular pathway.”

An early animal study1 suggested that nitric oxide can decrease episcleral venous pressure. Dr. Radcliffe noted the animal study mimicked what “might be the effects of Vyzulta,” but did not evaluate Vyzulta itself.

Dr. Okeke says it is understood that NO relaxes the TM fibers, making them more patent so that aqueous can flow through more easily.

“Theoretically, if the effect of the NO on the TM tissues can be prolonged for an extended period of time, one wonders if this compound could have the potential to modify structurally how the outflow system works, thereby modifying the overall glaucoma condition,” she explains.

According to Dr. Bacharach, the addition of NO could be why certain subgroups of patients have a robust response to Vyzulta.

“At least half of patients I switched to Vyzulta from either a name brand or generic prostaglandin were able to achieve additional pressure lowering, sometimes up to 4-5 mm Hg more,” Dr. Okeke says. Vyzulta was extremely well tolerated, and “some patients said they felt better after the switch, too, reporting less hyperemia and less irritation upon instillation.”

“There is still the question of whether adding something that treats the TM would be additive to selective laser trabeculoplasty or minimally invasive glaucoma surgery (MIGS), but a drug that also addresses episcleral venous pressure would not only be additive, but should help increase the success of those other procedures,” Dr. Radcliffe explains.

The reality of any new medication is that not all insurance carriers will cover it. (As a member of the prostaglandin class, insurance carriers will note that numerous other similar drugs are available to try on a patient before Vyzulta, even though Vyzulta has the addition of a nitric oxide.) Different situations will make sense “for all the topical treatments,” Dr. Bacharach says, adding he uses all the prostaglandins.

But, for example, if a patient is on generic latanoprost and needs a prior authorization in place to get it at a lower tier, “then Vyzulta may be a good replacement.” If someone is on generic latanoprost and timolol, “I would consider Vyzulta before adding a third medication,” he says, adding he uses Travatan Z (travoprost, Novartis) and Xelpros (latanoprost 0.005%, Sun Pharma) for people with benzalkonium chloride issues but also uses Lumigan (bimatoprost 0.01%, Allergan) for its potency.

Some evidence suggests that NO can modify both mechanical and vascular events in glaucoma pathogenesis.2 Latanoprostene bunod cleaves into latanoprost acid and butanediol mononitrate (an NO-donating moiety) when exposed to ubiquitous esterases in the ocular environment.3 NO donors elicit a “dose-dependent biphasic effect on trabecular meshwork relaxation and a reduction in myosin light chain-2 phosphorylation”4 and therefore provide potentially large benefits at appropriate concentrations.

Except for a bit of stinging upon instillation, Dr. Bacharach says his clinical impression “is right in line with the robust Phase 3 studies, and that it has been extremely well tolerated.”

The safety data on Vyzulta did not indicate any new or added safety issues from the addition of the NO; fewer than 1% of people exited the studies due to ocular side effects. OM

Disclosures: All three physicians interviewed are consultants for Aerie, Allergan and Bausch + Lomb.