Dexycu takes compliance out of the equation.

Postoperative compliance with eyedrop administration has always been an issue. Even if patients actually use their drops after surgery, approximately 90% of patients administer them incorrectly, including missing their eye, instilling an incorrect amount or contaminating the tip of the bottle.1 An electronic monitoring study found that the mean dose compliance after cataract and glaucoma surgery was only 50%, with the dose interval ranging from 4.6 to 19.7 hours, and approximately 17% of cataract patients discontinue therapy prematurely.2 The chances of medication compliance seem even slimmer when you add a taper of one drop per week from four drops a day the first week.

That is where Dexycu, from EyePoint Pharmaceuticals, comes into play. 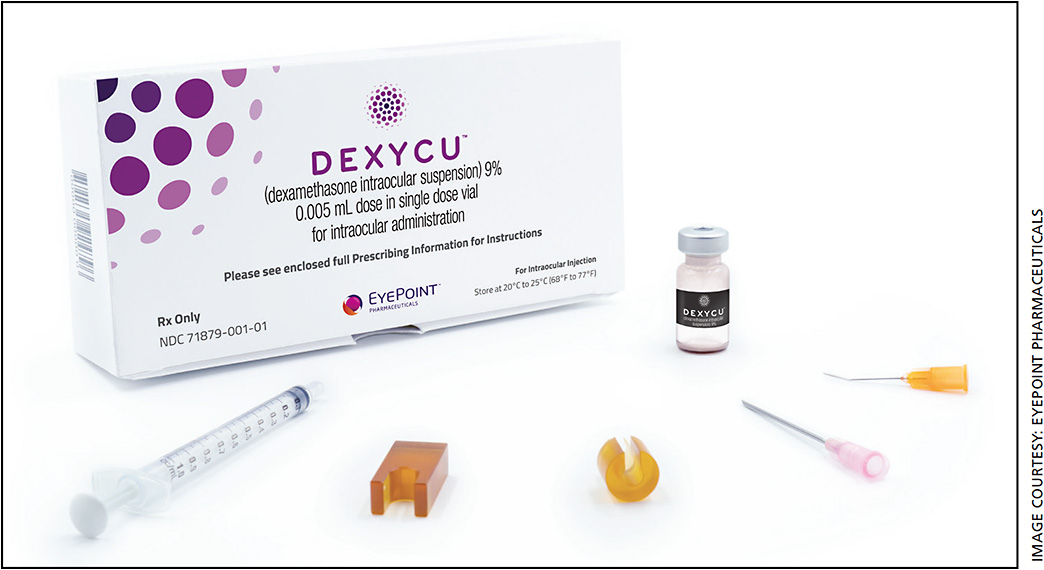 Dexycu (dexamethasone intraocular suspension) 9% is a single-dose, sustained-release intracameral steroid that relieves patients of the responsibility of using their postoperative steroid drops. The FDA approved it in 2018 as a single intraocular dose at the end of ocular surgery for the prevention and treatment of postoperative inflammation. Dexycu utilizes EyePoint Pharmaceuticals’ Verisome technology, which allows the pearl of steroid to bioerode gradually over approximately 3 weeks, tapering the release of the drug over that period.

Cynthia Matossian, MD, FACS, medical director at Matossian Eye Associates in New Jersey and Pennsylvania, was one of the principal investigators in the Dexycu trial and has used it in approximately 75 cataract cases. “Dexycu makes the patient’s journey effortless and smooth, decreasing the number of steroid drops required from 70 to zero, and taking compliance out of the equation completely,” she says.

Dexycu has been assigned a specific and permanent J-code (J1095) and pass-through status. In Medicare Part B, pass-through products are paid separately, in addition to the packaged procedural payment by CMS for cataract procedures. Due to its tiered launch, Dr. Matossian is only using Dexycu for patients who qualify, but would like to implement it as part of her standard surgical protocol as insurance coverage and reimbursement access broadens. EyePoint offers a program designed to ensure access to Dexycu for patients requiring financial assistance.3

“The preparation of Dexycu for delivery seems daunting at first, with approximately 10 steps, but it is actually intuitive,” says Dr. Matossian. “The key elements are shaking the vial of Dexycu vigorously and properly using the spacer, which is needed for administering the exact quantity of the drug, 0.005 mL or 517 micrograms.”

A bent cannula is inserted parallel to the iris through the side port incision, and the drug is introduced under the iris, in the sulcus between 5 and 7 o’clock. Brandon D. Ayres, MD, of Ophthalmic Partners of Pennsylvania and the Cornea Service at Wills Eye Institute, has used Dexycu in 30 cataract patients over several months. “The biggest challenge is keeping the spherule in the sulcus space,” he says. Dr. Ayres has found improved success using a 27-g bent cannula.

Both Drs. Matossian and Ayres suggest the surgeon remove the cannula as soon as the steroid spherule is released. It should be a quick withdrawal from the eye, to break the surface tension between the steroid “pearl” and the cannula tip. The side port is then gently sealed per usual with BSS, and the surgeon must be careful not to flush the Dexycu out of the eye.

While administering Dexycu is generally straightforward, sometimes the pearldoes not stay put, notes Dr. Matossian. “[It] can float, adhering to the optic, the anterior surface of the iris, or end up in the angle between the corneal endothelium and the anterior iris at 6 o’clock.”

Regarding administration, Dr. Ayres advises to “try for the sulcus, but don’t worry if the spherule ends up in the anterior chamber.” The spherule dissolves and disappears from view most often by one week post-surgery. “A 2 mm spherule is just right and is about one-third the size of the optic,” Dr. Ayres says.

But, if the quantity of Dexycu delivered into the eye is inadvertently larger than 2 mm or if it ends up somewhere other than where it is supposed to be, it can be easily removed through irrigation and aspiration followed by repeated administration.

The pearl of Dexycu is visible initially, depending on pupil dilation, but it becomes almost invisible as it dissolves. If the pearl ends up in the anterior chamber, the patient will see the medication in his or her eye as a small white dot, so be sure to communicate this information to the patient, caregiver and co-managing optometrist in advance.

CONTRAINDICATIONS AND POTENTIAL SIDE EFFECTS

While Dr. Ayres has incorporated Dexycu into his standard protocol for cataract patients, he refrains from using the drug in cases of complex anterior segment repair, sutured IOLs, DSEK or DMEK. “In these patients, it is very unlikely that the spherule will remain in the sulcus space,” he explains.

The side effects of Dexycu are the same as those expected for any ocular steroid; they may include increased IOP, delayed healing and exacerbation of infection. In a Phase-3 multi-center study, the most common ocular adverse effects were an increase in IOP (11.1%) and anterior segment inflammation, including iritis (9.5%).4 Dr. Matossian hasn’t noted any serious adverse events in the patients who received the drug. “I haven’t seen any delayed IOP spikes, so I would be comfortable using Dexycu in patients undergoing cataract surgery who have a diagnosis of glaucoma suspect or mild, well-controlled POAG,” she says.