Turning aberrometry “on its ear” 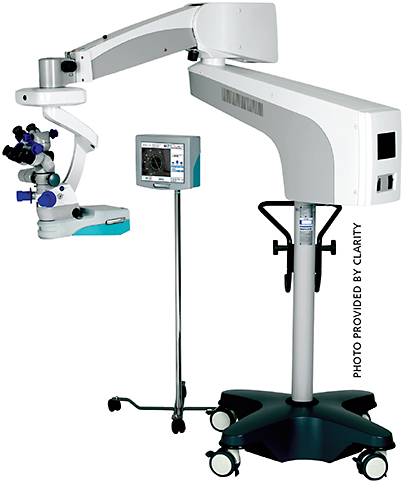 After only two months of using the Clarity HOLOS IntraOp aberrometer, John Solomon, MD, believes it “will take what we know about intraoperative aberrometry … and turn it on its ear.”

Dr. Solomon, of Bowie Vision Institute, began beta testing the HOLOS at his Bowie, Md., clinic in March. As one of the few video-based aberrometers on the market, the HOLOS offers a constantly updating stream of refractive data to surgeons, achieved by scanning the eye 90 times per second.

According to Clarity, this allows ophthalmologists to continue surgery without interruption during positioning of toric IOLs or limbal relaxing incision procedures. The HOLOS obtains this information by constantly scanning the eye’s wavefront emission, as opposed to previous models of aberrometers that only offer a “snapshot” of wavefront emissions. These models would usually take between 15 and 30 seconds to capture a single image, Dr. Solomon says. 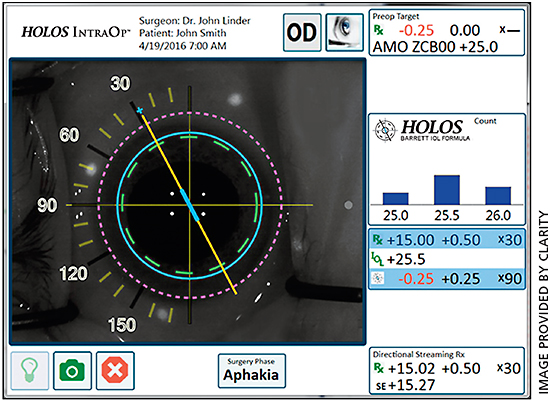 The HOLOS’ data display is shown below. A fake patient name has been used for the image.

“This is going to change the way we operate,” he adds.

The information displayed by the HOLOS’ dual-mode data display includes whether a target refraction is achieved and how surgical adjustments will affect refraction during alignment of a toric IOL.

Some of the statistics displayed are “incredibly” precise, down to a hundredth of a diopter, says Dr. Solomon. “There is a lot of information being delivered to the surgeon in real time. You really have to prepare yourself.” Because of that, using the HOLOS involves a learning curve.

But having those more precise measurements delivered instantaneously is very helpful to cataract surgeons, he adds.

And speaking of precise measurements, Clarity formally announced the release of the HOLOS Barrett Intraocular Lens Formula at the ASCRS meeting in New Orleans in May. This formula is available exclusively on the HOLOS IntraOp, and Dr. Solomon has used it as part of his beta test.

The creators of the formula, Graham Barrett, MD, and Warren Hill, MD, did “an unbelievable job” collaborating with Clarity on creating the proprietary formula, says Dr. Solomon.

The HOLOS Barrett IOL Formula is based on the Barrett Universal II and Barrett RX formulae, according to the company. The HOLOS’ formula increases accuracy by also adding aphakic data taken at the time of surgery.

Time, and how it’s used — and not used — is important in the operating room, and the HOLOS has a few unique features to help save more of it. The aberrometer notifies physicians when a wavefront profile or image is of poor quality, which stops them from dedicating time to something that will be of little use.

That real-time feedback is “another huge advantage to this technology,” says Dr. Solomon.

It’s a boon to the patient as well. “You don’t want to have to spend any more time inside the eye than is absolutely necessary, and I think the patient would feel the same way,” he adds.

Stephen Slade, MD, of Houston’s Slade and Baker Vision and a member of Clarity’s scientific advisory board, has used the HOLOS periodically over the last few years during its development. Video-based models like the HOLOS, and Alcon’s ORA, “are both faster and more accurate” than other models of aberrometers, says Dr. Slade.

He found that the HOLOS presented all the information he needed at any given time during surgery. “You want the most efficient, best data as quickly as possible,” he says.

The HOLOS is also less sensitive to ambient lighting conditions, Dr. Solomon adds. When his operating staff used other intraoperative devices, the lights had to be turned down as to not interfere with measurements, which is not a concern with the HOLOS.

The HOLOS is also capable of obtaining readings from eyes outside the normal range of aberration. These eyes could not have been recorded on Dr. Solomon’s prior intraoperative devices, resulting in an “unable to obtain reading” message, he says. This included eyes that were very nearsighted, very farsighted, and those with high or irregular astigmatism.

The HOLOS, though, can take such a reading from these patients, Dr. Solomon says. This makes it “equally impressive on all ranges of the spectrum.”

He credits this capability to HOLOS’ new type of aberrometer, the Sequentially Shifting Wavefront sensor. Other aberrometers use a “more rudimentary fringe pattern” for their calculations, which can be less accurate.

While the HOLOS provides many advantages to physicians, Dr. Solomon says that it’s not “plug and play.” He recommends his fellow ophthalmologists be “willing and patient” when learning to use the HOLOS. “It is fruitful in the end, and will pay off,” he says. OM

Dr. Solomon is a speaker for Alcon and a consultant for Clarity. Dr. Slade is a member of Clarity’s scientific advisory board.