Panel reveals why women are so much more susceptible to OSD than men.
Compiled by Ophthalmology Management Staff 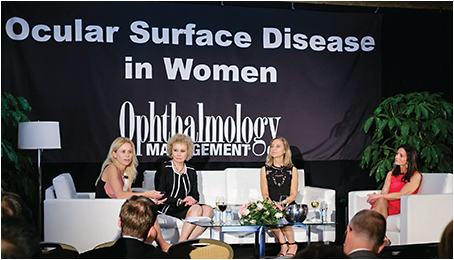 The “Ocular Surface Disease in Women” panel was held during ASCRS this past May.

The next patient who visits your office complaining of ocular surface disease (OSD) will likely be a woman, according to the experts who spoke at “Ocular Surface Disease in Women,” a panel discussion presented recently in New Orleans.

Among patients in his clinic who present with OSD, “it’s about a five-to-one ratio in my practice of women to men,” said Larry Patterson, MD, the chief medical editor of Ophthalmology Management, who introduced the panel.

“We know from the Beaver Dam Eye Study that dry eye is twice as common in women as it is in men, and if you break it down by age group, especially our older women, it’s much, much more common,” said the panel’s moderator Kendall Donaldson, MD, associate professor of ophthalmology and a medical director at Bascom Palmer Eye Institute in Southern Florida.

Dr. McDonald noted that contact lens wear and elective procedures such as laser vision correction, which are more common among women, can contribute to dry eye.

Panel member Alice Epitropoulos, MD, founding member of the Eye Center of Columbus and clinical assistant professor of the Department of Ophthalmology at Ohio State, said that women appear predisposed to developing systemic autoimmune diseases related to OSD, such as Sjögren’s syndrome and rheumatoid arthritis, lupus and skin conditions, such as psoriasis and rosacea.

“One out of 10 dry eye patients have Sjögren’s, affecting over four million Americans, and 90% of these are women,” she said.

A selection of the ophthalmic news out of New Orleans.

A recent study has found that Imprimis Pharmaceuticals’ Dropless Therapy is more effective than traditional eye drops for treating cystoid macular edema. The findings of the investigator-initiated clinical study were presented at ASCRS by Ahad Mahootchi, MD, a study investigator.

A total of 1,200 cataract surgery patients were monitored for the report.

The study found the CME rate in the Dropless Therapy group of patients was 0.5%, and 1.5% in the group that received the post-operative steroid drops.

A topical bimatoprost ocular insert may provide an alternative to timolol eye drops for patients suffering from glaucoma or ocular hypertension, according to a recent study published in Ophthalmology.

The findings of the study were presented at ASCRS by James D. Brandt, MD, one of the paper’s researchers.

The insert, which is a band placed around the eye and under the eyelids, is designed to decrease IOP by regularly releasing bimatoprost to the eye for up to six months; this would eliminate doctors relying on patients using drops on themselves.

A vision aid for the blind is redefining the concept of sight.

The BrainPort, from Wicab Inc., is a video camera attached to a pair of sunglasses, which connects via a cable to a sensor array worn on the tongue. The tongue array contains 400 electrodes capable of “translating” nearby objects detected by the camera into a stimulation felt on the tongue. According to Wicab’s website, the sensation is described as “pictures being painted on the tongue with tiny bubbles.”

The black-and-white camera strongly stimulates the tongue upon detecting “white” objects; “gray” objects provide mild stimulation, and “black” objects give none at all. This can even be used to perceive writing on signs. A controller can adjust the stimulation level.

Wicab’s founder and CEO, Robert Beckman, spoke about the BrainPort at ASCRS, and showed a video of a blind man using the BrainPort to aim and throw a dart at a nearby dartboard. That video and others can be viewed at http://www.wicab.com/#!video/sk1t6.

The BrainPort was cleared by the FDA in June 2015, as a tool to aid patients with only some or no light perception.

A new wave of IOLs will be brought to the market, thanks to a new partnership between Alcon and PowerVision.

The partnership, described by the two companies as a “strategic alliance,” will allow PowerVision to release its accommodating IOL, the FluidVision, to the U.S. The IOL is able to change focus through means of a fluid-driven, shape-changing technology, according to an Alcon press release. The fluid is carried in the IOL, and is transported by the the eye’s natural accommodating muscles.

The lens is intended for cataract patients who also have presbyopia.

Speaking at ASCRS, Barry Cheskin, PowerVision’s co-founder, president and CEO, said the AIOL has been implanted into 150 eyes, with no adverse effects after 36 months of study.

The FluidVision is currently an investigational device, not available for sale or use in the U.S., according to PowerVision.

Abbott Medical Optics took to social media recently to reach out to those considering LASIK.

As part of their direct-to-consumer LASIK campaign, the company wanted to determine why people undergo, consider or forego the corrective treatment. Information from the campaign was shared at ASCRS by Viru Parlikar, director of global consumer marketing for AMO.

More than 1,200 U.S. consumers were surveyed about LASIK as part of the campaign. Abbott used social media platforms such as Facebook and Tumblr, as well as other digital marketing channels, to address topics such as cost of the procedure, potential side effects and fear of undergoing LASIK. The campaign also directed people to Abbott’s backinfocus.com web site, where they could find a LASIK doctor and calculate costs.

Following the campaign, Abbott is seeing a double digit difference in growth rates between the LASIK accounts that participated in the new campaign, and those that did not, according to the company. Exact figures for the increase could not be disclosed.

Procedure rates for LASIK have declined since the start of the recession, according to AMO. OM

The American Refractive Surgery Council was recently reformed, with help from several leading ophthalmic companies, to help people make more informed choices about LASIK and refractive surgery. The ARSC’s resources, available at www.americanrefractivesurgerycouncil.org, are meant for consumers and industry members looking for informative content about LASIK and other refractive procedures.

California-based OASIS Medical Inc. has received a CE Mark for its SOFT SHIELD Collagen Corneal Shields; this will allow OASIS to market the product internationally.

Putting patient preferences under the microscope

A collaboration between the FDA and American Glaucoma Society will examine a “years overdue” topic: what do patients want out of their glaucoma surgery?

George Spaeth, MD, of Philadelphia’s Wills Eye Hospital, is chairing a 12-member committee formed by the American Glaucoma Society to assist the FDA in this “patient preference” research. The FDA has tasked two of its Centers of Excellence in Regulatory Science and Innovation, or CERSIs, to study the matter. The center located at Johns Hopkins University will investigate patient preferences in glaucoma treatment, with a focus on minimally invasive glaucoma surgery (MIGS) devices. The University of California, San Francisco/Stanford University’s CERSI will create patient-related outcome measures, or PROM, to assess health-related quality-of-life among those with mild to moderate glaucoma, according to Kuldev Singh, MD, MPH, ophthalmology professor and director of glaucoma service at Stanford.

Each center will conduct its research in parallel, but during the project will regularly communicate with the other center, as well as with the FDA and the AGS, according to Dr. Singh.

“I am thrilled about this. This is hundreds of years overdue,” says Dr. Spaeth.

“Demographics are meaningless. Every patient is unique,” he continued. “Only the patient knows what is important to the patient.”

For instance, some patients may prefer to have just one postoperative visit, and average results, whereas others may want up to 20 postop visits to ensure great results, Dr. Spaeth says.

The UCSF/Stanford CERSI is collaborating with the RAND Corporation, which is organizing a series of patient focus groups across the country. The first will be held in the Santa Monica-L.A. area this summer, according to Dr. Singh.

EYE ON THE ODD

Few in the history of medicine are quite as enigmatic as William Horatio Bates, a New York eye doctor in the late 1800s and early 1900s. While many sources are critical of his controversial eyesight treatments, which include staring at the sun to strengthen vision, what might be even more fascinating is a mysterious bout of amnesia that took hold of him in 1902. Jay Robert Nash’s book “Among The Missing” recounts the tale, stating that the 42-year old Dr. Bates abandoned his well-established practice and wife, leaving only a note that he was “called out of town to do some major operations” with a former student. Six weeks later, Mrs. Bates received an anonymous letter stating her husband was practicing in London’s Charing Cross Hospital. When she traveled to find him, Dr. Bates claimed to not recognize her and that he had never heard of “William Bates.” Two days later, he disappeared. Mrs. Bates returned home alone and died three years later. Then, in 1911, Dr. Bates suddenly returned to his practice and resumed work. Of the intervening years, he only said that he wandered Europe as an amnesia victim, continuing to operate on people.

Feedback from these groups will help develop the PROM; once made available, the PROM may be helpful in the review process for new MIGS devices, says Dr. Singh. For a device to receive clearance, there needs to be an assessment of the health-related, quality of life value patients ascribe to novel therapies. There is currently no such tool that is ideal for MIGS devices.

Allowing companies to use this resource, instead of creating their own for each new project, will “make it easier to innovate in the field,” says Dr. Singh.

The collaboration between the FDA and AGS could open the door for future patient preference studies across other fields of health, says Malvina B. Eydelman, MD, director of the FDA’s division of ophthalmic and ear, nose and throat devices. Dr. Eydelman spoke on this topic at March’s AGS conference.

“We believe the patient perspective should be part of the whole process, from idea to post-marketing,” Dr. Eydelman says. OM