Beware the medico-legal dark side of EMR

Dr. Walton was supposed to testify for just 15 minutes; he was only speaking about the visual acuity of the plaintiff — his patient. Yet he had spent almost an hour answering questions about the minutiae in his EMR system. He saw the patient for diplopia after cataract surgery, and I asked him to show that the plaintiff was exaggerating her injury. She claimed to be “blind,” but his EMR showed her with 20/40 vision in the operated eye.

The patient’s attorney asked Dr. Walton about the Review of Systems. It said “no hearing loss,” but Dr. Walton said he didn’t remember asking about that. The EMR automatically filled that in and showed the same with respiratory, musculoskeletal and gastrointestinal. He didn’t check for any of that, even though the EMR showed he did. So, he agreed some of the medical record for this patient was inaccurate but the ophthalmic information was correct. The plaintiff’s attorney pointed out that the patient had upper lid ptosis, but the EMR showed that lids and lashes were normal bilaterally. Could the jury believe anything that was in the EMR?

We’ll get to that in a minute.

While EMR records are legible and time stamps often useful, difficulties can arise in litigation. Here are the biggest problems I have seen and what you can do about them.

Also known as autofill (or, often, autofiction), this function in many EMRs can be made to forward all data from the last visit to the next. For some fields, it is appropriate (family history, past medical history, prior refractions). However, it is the most commonly abused function I deal with in litigation.

Problems arise when it is used for IOP, visual acuity, manifest refractions, slit lamp exam findings and other exam data that often change from visit to visit. In a recent angle-closure glaucoma case, the “SLE” section automatically recorded the angles as “normal,” but the dictated “Assessment” section identified angle-closure glaucoma. The physician skipped the SLE section because he already knew what the patient had and went straight to the Assessment/Plan section. The EMR automatically, and incorrectly, filled in the rest. This occurs in almost every case I have, whether in my client’s records or, as set forth in the introductory paragraph, the record of another treating physician.

To prevent this, disable or limit the auto-fill function. Treat the EMR no differently than a regular paper record — 10 years ago you wouldn’t have copied clinical data from a prior visit into the current exam note.

Not “signing” and closing out an entry

During a patient visit, several people may enter data into the patient’s chart: the ophthalmologist, the technician and perhaps an optometrist. To avoid multiple entries, the entry is sometimes not signed and thereby left open for additions or editing until after the visit is over.

This creates two problems. First, the “time-stamp” indicating when the entry is made is generally not entered until the note is signed. Second, anyone can make an entry, and sometimes an entry is made into the wrong patient’s chart. For example, a patient may present with nondescript eye pain and a thorough exam accurately reveals a corneal abrasion, but the ophthalmologist doesn’t sign because the tech must add more data. Weeks later, the patient presents to an ER with significant, debilitating eye pain from endophthalmitis. The ophthalmologist’s office receives a call for records, the doc signs the prior note before forwarding the chart, so the corneal abrasion entry is now dated after the doctor had learned of the endophthalmitis. The patient’s attorney will likely argue the benign exam was fabricated. 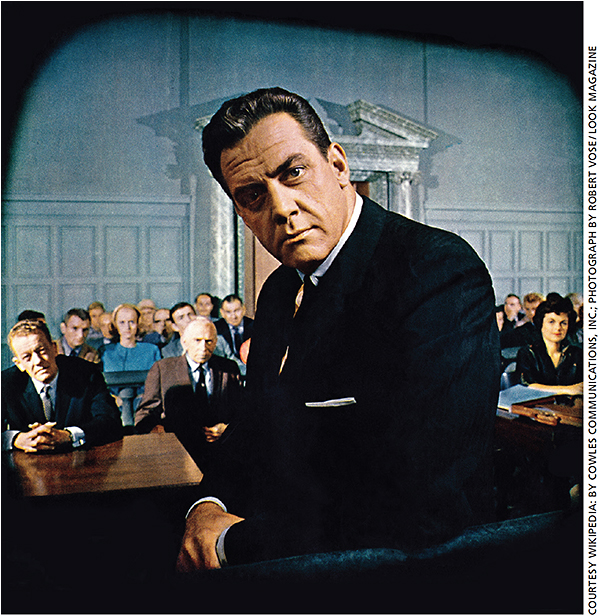 Do you want him picking apart your electronic health records in court? Raymond Burr as Perry Mason on the cover of Look, 1961.

To prevent this, sign off on the chart entry the day it was created, and make an addendum if anyone adds data: This will more accurately reflect what happened and when.

The numerous data fields within an EMR are selectively accessed depending on the report requested, which can result in missing data. This happened to a client only a few months ago. He received a Medical Board inquiry, drafted a response and sent in the records his staff generated with an EMR report. We anticipated a quick dismissal. Surprisingly, the Board proposed sanctions due to lack of evidence that a patient who had his IOP checked was receiving topical steroids.

The doctor was flabbergasted. He did IOP checks at every exam when possible, but the records provided to the investigators did not pull in the IOP data from the relevant EMR data field. His staff called the EMR vendor, learned how to get the data into a different report, and forwarded the new records to the investigator. The sanctions were withdrawn. This common problem is exacerbated because the printed data do not resemble what is on the screen.

To avoid this, invest in adequate training. An EMR is only as good as the training to use it. Also, as a physician, take the time to review the chart personally to ensure completeness before sending it out — your reputation is on the line.

In a trial last year, the plaintiff’s attorney mockingly read aloud the chief complaint from the plaintiff’s EMR chart. An industry that can create robots with artificial intelligence should be able to generate a sentence that resembles good English. It hasn’t.

I have tried many cases in which the outcome hinged on the subtleties of how the technician heard and described the complaint. Subtleties are lost when drop-down phrases are cobbled together into bad sentences. If the technician’s history entered into the EMR does not accurately reflect what the patient tells you in your interview, take the time to expand or refine it.

Another common misuse of preformed entries occurs when documenting the informed consent process. The EMR makes it easy to document a discussion and whether it occurred. A true example from a myopic patient visit: “I counseled the patient regarding the following: Myopia can be managed with corrective eyewear, such as eyeglasses or contacts to correct the vision. Refractive laser surgery approaches include RK, PRK and LASIK. Lens-based options to correct myopia include RLE, ICL. Corneal-based surgery includes corneal inlays and Intacs. Myopia develops during school age and is a result of the eyeball being too long or the cornea having too much curvature. Patients usually complain of not being able to see or read distant objects . . ..” It’s unlikely that the doctor had that conversation with a 77-year-old patient who wore glasses for more than 60 years.

To avoid this, use voice recognition if your EMR supports it. Also, don’t chart conversations that did not occur. In many depositions through the last three years involving different plaintiff attorneys, I have heard the same question: “How long did it take you to generate this entry?” The answer is invariably “a few seconds; it is just a mouse click.” If, as above, portions of the chart defy common sense, the jury may question the legitimacy of anything in the chart.

Dr. Walton is a fictitious name, but the rest of what happened at that trial is true. The complaint involved a retained nuclear lens fragment following removal of a very dense nuclear sclerotic cataract with IOL placement. The patient, however, refused another operation to remove the fragment. After two weeks she relented, the fragment was removed, and she had a good result considering her noncompliance and dry macular degeneration. Several postop exams by several ophthalmologists showed 20/40 vision, but macular degeneration precluded 20/20 vision. The plaintiff blamed it all on my client, the cataract surgeon, and claimed near-blindness in the eye.

Faced with overwhelming documentation of good postop vision, the plaintiff’s theme was “the records don’t tell the whole story.” The plaintiff’s attorney’s strategy on cross-examination was to exploit the inherent flaws in EMRs to undermine their overall credibility and thus raise a question about the accuracy of the excellent visual acuity measurements. It didn’t work: Had it been a closer case, the plaintiff’s approach may have worked.

Please note that these problems are not necessarily unique to EMRs. They are, however, easier to have with EMRs and are hence becoming more common. OM