Substance abuse and the eye

Smoking, binge drinking and drug abuse can lead to serious eye-health conditions, including glaucoma, even blindness.

What the 30-year-old male patient told Amanda S. Legge, OD, and what she saw, didn’t add up.

Two weeks earlier, he told Dr. Legge that he had dramatically and suddenly begun losing vision, and seemingly for no reason. No floaters, no pain, and no, he’d never had an eye exam before. And, he insisted, no illegal drug use. She suspected otherwise.

The patient’s primary care physician performed numerous tests, none of which uncovered anything that could explain his suddenly deteriorating sight. 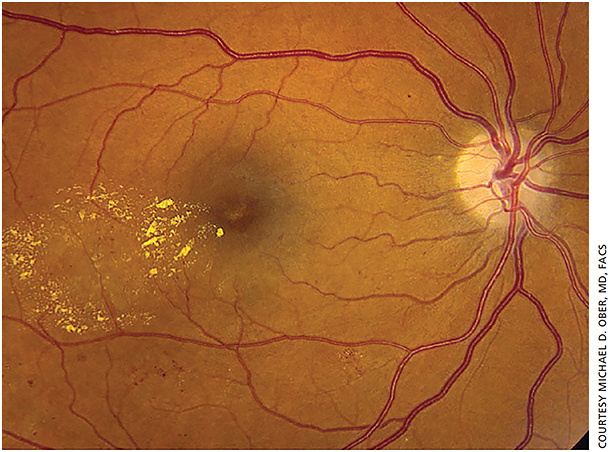 Figure. Without treatment, nearly half of those developing diabetic macular edema (pictured) will lose more than two lines of visual acuity. The link between heavy drinking and type 2 diabetes is well established.

Dr. Legge, of Wyomissing Optometric Center near Reading, Pa., questioned the man further. “He finally admitted he was injecting crack cocaine with vinegar, 10 to 15 times a week,” she says. She immediately referred him to a hospital, where further tests confirmed a devastating and likely drug-resistant infection.

Many providers may never encounter a patient who engages in that man’s kind of intensive illegal drug use. But it’s a safe bet that a few patients who walk into an ophthalmologist’s office on any given day may commit the health-care sins of smoking, heavy drinking and, in some cases, drug abuse. And they may not want to confess those transgressions.

While the commonly known consequences of those bad habits include cancer, diabetes and heart disease, smoking and drinking to excess and (even occasional) drug abuse will harm the eyes (see chart, page 35).

“A not-healthy lifestyle translates to a number of health problems,” says Robert J. Derick, MD, of Columbus Ophthalmology Associates in Ohio. “And a number of those are eye-related.”

Illegal drug abuse is at the extreme end of these vices. An estimated 24.6 million Americans over age 12, or 9.4% of that age group, reported using illegal drugs in 2013.

The eyes do not escape deleterious impact.1

Methamphetamine use, for example, is associated with retinopathy, corneal ulceration and retinal vasculitis.2

“Clinicians need to be aware of the ocular problems that may be related to drug use so that pertinent questions may be asked regarding the cause,” wrote A.Y. Firth, MD, in a 2005 Eye editorial.3

Many people still smoke cigarettes, despite decades of health warnings, public awareness-campaigns and increasing societal disapproval. The Centers for Disease Control and Prevention estimated that some 42.1 million (or 17.8%) of U.S. adults smoked cigarettes as of 2013.4

In addition, partial or complete blindness due to retinal artery thrombosis is at least twice as frequent in smokers as in nonsmokers. Smokers of 20 or more cigarettes a day were two to three times more likely to develop age-related macular degeneration as compared with those who had never smoked.6

Since California became the first in 1996, a total of 23 states and the District of Columbia — jurisdictions home to more than 140 million people — have made marijuana use legal for certain medical conditions. In 21 of those states, glaucoma is one of those approved conditions.1 With more than three million Americans battling glaucoma,2 it’s likely that plenty of ophthalmologists’ patients are curious about the drug that is emerging from the counterculture shadows.

“A lot of people ask, but a lot of the time, it’s in jest,” adds Robert J. Derick, MD, of Columbus Ophthalmology Associates, who estimates that glaucoma patients comprise about 60% of his practice.

Their states’ laws may be as different as the demographics of their patients, but Dr. Iwach and Dr. Derick have the same advice for anyone thinking about trying marijuana as a treatment for glaucoma: don’t.

When patients ask, Dr. Derick says, “I tell them we’re very concerned about people having to be on it all the time.”

That advice echoes the official positions of the American Academy of Ophthalmology, and the American Glaucoma Society.

AAO, in a 2014 statement on marijuana use for glaucoma, cited potential risks associated with the drug, including: “. . . an increased heart rate and a decrease in blood pressure.” The statement also cited indications that the drug might compromise blood flow to the optic nerve. And it concluded that there simply is no scientific evidence to demonstrate that marijuana has any benefits beyond those provided by the approved treatments already available for glaucoma.3

In 2009, Henry Jampel, MD, professor of ophthalmology at Johns Hopkins University and medical director of the Wilmer Eye Institute at Green Spring Station, summed up the glaucoma society’s position: “It has been definitively demonstrated, and widely appreciated, that smoking marijuana lowers [intraocular pressure]. . . Less often appreciated is marijuana’s short duration of action (only three to four hours) meaning that to lower the IOP around the clock, it would have to be smoked every three hours.”4

Nothing that has happened in the six years since he authored that paper has changed his position, Dr. Jampel says.

“It has to be used too frequently (at least four times a day) for there to be any sign of pressure change, and the side effects can be very bothersome to a patient ... a person is unable to drive if they are using marijuana as a treatment option,” Dr. Jampel wrote in an e-mail.

It has been established that tetrahydrocannabinol, better known as THC, a component of marijuana, does decrease intraocular pressure, says Kari Franson, MD, associate dean for professional education at the University of Colorado’s Skaggs School of Pharmacy. How it does that, “we really don’t know.”

Studies of marijuana are rare in the United States — despite legalized use in many states, the federal government still classifies it a Class I drug, meaning it is considered highly dangerous,5 and therefore researchers may not give it to subjects, Dr. Franson says.

What is known about the drug largely results from studies done in Europe, she says. Small studies there confirm what Dr. Jampel said, namely, that patients have to use the drug constantly to maintain the lessening of IOP. And, Dr. Franson continuesm one small study indicates that patients who use the drug regularly develop resistance to it, so they require ever greater amounts to obtain the desired effect.

Beyond any moral objection to its use, Dr. Franson says the way marijuana is packaged and sold, largely without regulation or consistent composition or dosage, there is no telling what a customer is actually getting.

Or, as Dr. Jampel puts it, “Marijuana as a treatment is not ready for prime time.”

Heavy drinking may be an even bigger problem. One in six U.S. adults binge-drinks about four times a month, consuming about eight drinks per binge.7 So, some of your patients more than likely suffer the myriad health effects of excessive drinking.

The link between heavy drinking and type 2 diabetes is well established, as are the ocular consequences of diabetes. In addition, several studies have established excessive alcohol consumption as one potential factor in optic neuropathy, and a Boston University study found that consuming more than two “standard drinks” a day was associated with a significantly increased likelihood of cataract surgery.8

An Australian study from 2012 found that drinking more than 20 grams of alcohol a day — only about 0.68 ounces — was associated with an approximate 20% increase in the odds of early-onset of age-related macular degeneration.9

That’s not to say physicians ought to become modern-day temperance crusaders. A 20-year study of nearly 5,000 adults, known as the Beaver Dam Eye Study, found that people who drank no alcohol were more likely to experience vision impairment than people who drank a little.10 And, those who avoided alcohol use had a greater incidence of cataract surgery than those who were moderate drinkers.8

Most physicians, including ophthalmologists, take a medical history of new patients; many do so at every visit. And it is routine for those intake surveys to include questions about smoking and alcohol and substance abuse.

Indeed, when another patient came to Dr. Legge with sudden and severe blurred vision, evidence pointed to infection. The patient readily admitted to regular heroin use, which paved the way for successful treatment of the infection with intravenous antimicrobial therapies, says Dr. Legge, who works not far from an area that is known for illicit drug activity.

Patients need to know their eyes could get more than red and droopy when indulging.

Still, many patients conceal their bad habits. When they aren’t forthcoming, savvy physicians can often sniff out the deception — literally. “Ophthalmologists are often in close proximity to their patients,” Dr. Iwach said. “You kind of know what’s going on.”

Some telltale signs can help ophthalmologists to figure out which patients drink heavily, Dr. Iwach says. “For those with glaucoma, if you’re seeing them in the late afternoon, and the eye pressure looks really good — too good,” that may mean excessive drinking is happening. “Alcohol lowers eye pressure.”

Faced with such evidence, ophthalmologists must build trust with patients if they want to wade into the minefield of their personal vices. “A key part of medicine is you have to deal with each patient as an individual,” Dr. Derick says. “And each will respond as an individual. As ophthalmologists, we have an advantage: We can develop relationships with patients over months and years and get to know patients and how to approach the subject.”

If the patient smokes or drinks, Dr. Iwach recommends broaching the subject with concern and a sincere desire to help, rather than with judgment or lectures. “Make them comfortable enough to tell you the truth. Let them know you understand these are not easy habits to break.”

It’s hard to conceive that U.S. adults are unaware of the risks of heavy drinking or smoking. Still, hearing that some of those harmful effects may really apply to them — and may compromise their sight — can jolt patients into action, Dr. Iwach says. “When they hear they are at risk of vision loss, that’s powerful motivation.”

It can be a tricky discussion. But, as Dr. Legge has discovered, the fruits of such honest conversations can provide practitioners with the tools to potentially save a patient’s eyesight. OM

5. The health consequences of smoking—50 years of progress. A report of the Surgeon General. U.S. Department of Health and Human Services. http://www.surgeongeneral.gov/library/reports/50-years-of-progress/exec-summary.pdf. Accessed Nov. 20, 2015.