MIGS as a first-line treatment?

Drops can be a compliance issue; but minimally invasive techniques can reduce their use and untoward side effects.

The use of topical eyedrops to lower intraocular pressure (IOP) has been the mainstay of initial glaucoma treatment. With multiple mechanisms of action, these various glaucoma medications can work alone or in combination. But, the efficacy of these medications can be low due to poor patient adherence (even when prescribed once daily). They also can produce myriad, significant side effects, such as ocular surface irritation, redness, tearing, change in eye color, and changes in periorbital anatomy, as well as systemic side effects including headaches, fatigue, and depression.1-3

With the wide adoption of minimally invasive glaucoma surgery (MIGS), many more eye-care providers have opted to treat glaucoma surgically, even in its earlier stages, and not just in the disease’s moderate to severe phases. As they can with medication, surgeons can choose different pathways of action, with various MIGS’ surgical techniques either in succession or in combination. (See Table 1).

In 2015, several new MIGS procedures entered the market, including Visco360 and Trab360 (Sight Sciences), Kahook Dual Blade (New World Medical) and the ab-interno canaloplasty (ABiC [Ellex]). Along with the already established Trabectome (Neomedix) and iStent (Glaukos), these procedures allow for three various mechanisms of action: removal, bypass and dilation of the areas of resistance in the outflow pathway.

The outer trabecular meshwork (TM) is the major site of resistance to outflow of aqueous humor. Removing this meshwork, an important MIGS mechanism of action, allows aqueous humor to drain directly into the exposed outflow collector channels of Schlemm’s canal (SC). This can be performed with the meshwork’s partial or complete removal.

Trabectome, available commercially in 2006, was the first MIGS procedure.4 Though incisions into the canal (goniotomies and trabeculotomies) have been performed for decades, the Trabectome device provides a unique ab-interno approach to the angle through a temporal clear corneal incision.5 The device’s features include electroablation and aspiration of debris under a protective foot plate to prevent damage to the scleral wall and collector channel ostia (Figure 1).

Figure 1. Electrocautery ablation of trabecular meshwork re-establishes access to the naturally draining pathways of the eye.

Gonioscopy-assisted transluminal trabeculotomy (GATT) was first described in 2014 as a modification of trabeculotomy with a clear corneal ab-interno approach instead of the traditional conjunctival ab-externo entry.6 After its insertion into the anterior chamber (AC), a blunted prolene suture is likewise inserted through an incision in the meshwork created with a microsurgical blade, that passes into Schlemm’s canal for 360 degrees. Then, it is pulled to excise TM and unroof Schlemm’s canal.

Figure 2. Schematic of Trab360 insertion tube that had been fully advanced and is now being pulled inward to cut the overlying trabecular meshwork and expose Schlemm’s canal and the outflow channels.

The Kahook Dual Blade, FDA approved in fall 2015, excises TM tissue by using precision micro-machining and laser-cutting technology. A key feature is its ramp that stretches the TM as the device advances, aiding in the meshwork’s clean excision. (Figure 3). 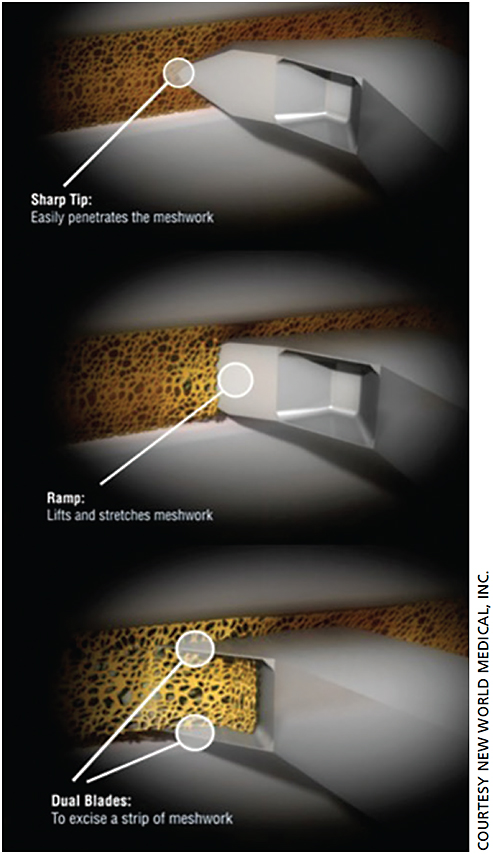 Figure 3. The Kahook Dual Blade’s mechanism of action: how it incises and removes trabecular meshwork tissue.

Another approach for combating the area of highest resistance involves bypassing it. A stable conduit, or stent, allows fluid to flow past the TM, which improves aqueous outflow.

The iStent, a trabecular micro-bypass, is a 1-mm titanium implant that resembles a snorkel. Released in 2012, it is the smallest FDA-approved device that can be put into the human body, the company notes. The iStent gained approval only in conjunction with cataract surgery, making it a great option for patients in need of cataract surgery who have early to moderate open-angle glaucoma.

Currently in clinical trials, the iStent inject (Glaukos) and Hydrus Microstent (Ivantis) show much promise. The iStent inject has a different design from its commercially available cousin purporting easier insertion. And, since early reports show a benefit of more than one iStent insertion,7 the iStent inject protocol allowing for the insertion of two stents is believed to offer even more IOP lowering capability. At least one study, while Glaukos-financed, has shown that inject reduced IOP for at least one year without medication.8,9

Hydrus Microstent has a unique intracanalicular scaffold design that looks like an eyelash. It is made from nitinol, a super-elastic, biocompatible alloy. The Hydrus device is inserted into the canal where the open design allows blocked fluid to flow more freely.8

The external canaloplasty approach was FDA-approved in 2007, and has proven to be a very viable procedure to effectively lower IOP in glaucoma patients. That said, the technique is considered a very technically challenging surgical option. Canaloplasty increases aqueous flow using a microcatheter that enters through the meshwork and into Schlemm’s canal for 360 degrees. It dilates the latter and the more distal collector channels by releasing viscoelastic behind the TM that separates compressed tissue planes. The external approach involves cutting into conjunctiva in an extremely detailed fashion.

Two new MIGS procedures allow canaloplasty through an ab-interno approach, providing a simpler technique with similar positive outcomes. Visco360 is a single-unit disposable device. At first glance, it looks almost identical to the Trab360 instrument. However, the Visco360 device features an internally integrated infusion pump and reservoir for viscoelastic that allows for controlled delivery of viscoelastic fluid anywhere in the anterior chamber.

The ABiC procedure provides a simple internal approach to canaloplasty. It uses a light source, the patented microcatheter with an illuminated tip and open inner lumen, injecting high viscosity viscoelastic for a safe and effective 360-degree dilation of Schlemm’s canal, the trabecular meshwork and the outflow collector channels.

These MIGS techniques can be combined with cataract surgery, which can increase the IOP-lowering capability of the procedure. The combined ICE procedure (iStent, cataract removal and endocyclophotocoagulation) is being used with a report of good outcomes.10 Another combination option with Visco360: a surgeon can perform a combined procedure using trabeculotomy and viscocanaloplasty techniques in a single eye. For up to 180 degrees, the surgeon can insert and retract the injection tube to release viscoelastic. Then, in the other direction, the surgeon pulls the injection tube internally instead of retracting to cut TM and unroof the canal and outflow channels.

It will be important for surgeons moving forward to stay above the fray by learning various techniques, which once mastered, will be a pleasure to perform, as well as provide hopeful options for individualized and safer care of glaucoma patients. OM