The slit lamp camera allows eye measurements to be taken from a photo.

Via the lens of Eye Photo Systems’ EC-100 slit lamp camera, an image can be worth 1,000 measurements.

The EC-100 allows ophthalmologists to take measurements of an eye directly from a captured image. Its preset modes can take optimized pictures of various parts of the eye, including the eyelid, conjunctiva, iris, lens, anterior chamber and cornea.

Greg Ogawa, MD, of Eye Associates of New Mexico, in Albuquerque, has been using slit lamp cameras at his clinic for more than two decades. The EC-100 provides much faster results than the previous cameras he’s had. Other models “[used] up a lot of time trying to get a good photo. With this, we know we can get a good photo quickly.” 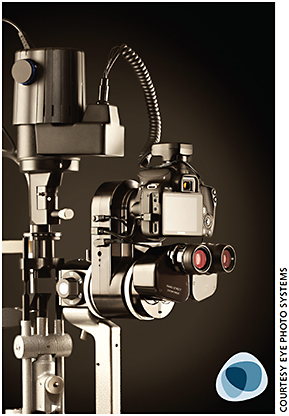 Among the EC-100’s features is the ability to more accurately make toric alignments using eye “landmarks.”

“GETTING BETTER EACH YEAR”

Dr. Ogawa’s clinic bought the EC-100 about three years ago to replace its existing imaging system. He’s planning to buy a second one for his Santa Fe clinic.

Two features of the EC-100 helped win him over: its ease of use and its toric alignment system that uses eye “landmarks” to better align lens implants.

Images are acquired in one clinical location, and printouts of that image can be easily taken and shared with the surgery room for intraoperative reference. This saves the clinic from needing a camera in each surgical center, says Dr. Ogawa.

“We can use this system regardless of where we’re operating in the clinic.”

His previous camera models could not print out and share toric alignment roadmaps like the EC-100 can. So, Dr. Ogawa had to buy a separate camera for each of his clinic’s four surgical centers, which was much more expensive.

The EC-100 is compatible with “digital-ready” slit lamps, according to Eye Photo Systems’ website. The company will tell clinics if the EC-100 will work with their lamp if the clinic provides the make and model.

“We’ve been very happy with the slit lamp software,” Dr. Ogawa says, and the camera’s measurement capabilities have “been getting better each year that we’ve had it” thanks to continued software updates from Eye Photo Systems.

The EC-100 is not difficult to use. If a specialist is out of the office, another staff member can take the photo. The specialist can later reference that photo once he or she returns. This helps decrease the number of patient return visits, making the office run more efficiently, Dr. Ogawa says. The EC-100 is “an excellent tool for knowing if we’re going in the right direction for therapy,” he adds.

Another feature Dr. Ogawa appreciates is the system’s ability to adjust the brightness of an image after the photo has been taken, rather than taking an entirely new photo to adjust brightness.

The EC-100 also has a toric alignment system that is more accurate for lens implantation than the use of ink markings, according to Dr. Ogawa.

The system can take an image of a dilated pupil and can then identify “landmarks,” such as features around the iris or large conjunctival vessels. An ophthalmologist chooses between two to four of these landmarks and the axis on which he or she would like to place the toric lens; these provide the surgeon with clear orientation during surgery.

Landmarks, via the software, can be selected at a later date, after the examination is completed. Dr. Ogawa says it is not uncommon for technicians to capture the image and select the landmarks for the ophthalmologists.

This “iris fingerprinting” software was designed with the guidance of Robert H. Osher, MD.

Eye Photo Systems was founded with the goal of providing professional-grade photo technology to ophthalmologists, and making photography a task easy enough to delegate to other clinic members.

Dr. Ahmed wanted a tool that could measure images of the eye, so characteristics such as lesions and intraocular dimensions could be examined for changes over time.

Dr. Ahmed’s office uses multiple photo systems, but the EC-100 is the easiest to use, he says, which is why he wanted to work with EPS.

The EC-100 has been great, Dr. Ahmed says, and his clinic uses the images to help patients and for teaching purposes.

Now, Dr. Ahmed no longer needs to use separate, cumbersome systems to obtain photos. It’s passé not to have this ability in the modern office, he says, which is why they invested in the technology. OM