Systemic drugs that can affect the retina

A common treatment for rheumatological disease leads the way.

In ophthalmology, it’s easy to get myopic — pun intended — about eye health.

Despite protection from the blood–retinal barrier, some systemic drugs can affect the retina.

Here’s a rundown of some of the most common drugs that do so — and what ophthalmologists should know about managing any possible effects.

Although they originally started as antimalarial drugs, hydroxychloroquine (Plaquenil, Sanofi-Synthelabo) and chloroquine (Aralen, Sanofi-Synthelabo) are more commonly used in the industrialized world to treat rheumatoid arthritis (RA) and systemic lupus erythematosus (SLE), says Frederick W. Fraunfelder, MD, MBA, the Roy E. Mason and Elizabeth Patee Mason Distinguished Professor, and chairman, ophthalmology, University of Missouri Health System, Columbia. While the drugs work effectively for many rheumatological patients, they are also associated with retinopathy in a small group of patients if used for five years or longer.

No treatment exists for retinopathy caused by chloroquine or hydroxychloroquine, which is why ophthalmologists and the physicians prescribing the medications need to stay aware of the possible side effects, according to a 2011 white paper from the American Academy of Ophthalmology.1 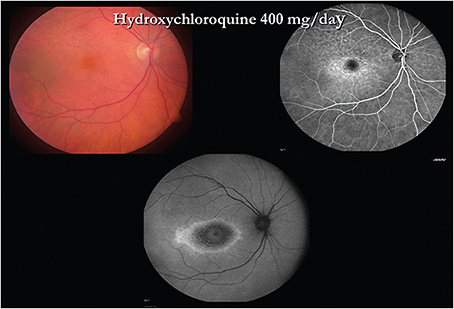 Because the drugs work well, rheumatologists often prescribe them, and it’s not uncommon for patients to take them for a decade or longer, says William F. Mieler, MD, Cless Family professor and vice-chairman, director residency and vitreoretinal fellowship training, Department of Ophthalmology & Visual Sciences, University of Illinois at Chicago. Dr. Mieler is a co-author of the AAO’s 2011 white paper.1

The risk depends on duration and dosing, Dr. Mieler says. If the patient is on the recommended dosage, there’s little risk, unless the patient is of short stature, since the potential for toxicity is based on ideal body weight. “After five years’ duration on the drug, when the risk of toxicity is greater due to a higher accumulative dosage of medication, we’ll monitor the patient more frequently.” A routine dose is 400 mg of hydroxychloroquine or 250 mg of chloroquine daily.

When a person is on one of the medications for longer than five to seven years or uses a cumulative dose of 1000 g of hydroxychloroquine, there’s a 1% risk of toxicity, according to the white paper.1

For this reason, baseline exams are recommended when starting these drugs to rule out maculopathy and to serve as a reference point. An updated version of the white paper will be published in late 2015 or early 2016 (the first white paper on the topic published in 20022), Dr. Mieler says. The newest update will discuss in more detail the role of screening tests for drug-associated retinopathy, including multifocal electroretinogram, spectral domain optical coherence tomography, and fundus autofluorescence. “It is now recommended that along with Humphrey 10-2 automated visual fields, at least one of these procedures be used for routine screening where available,” the white paper reported. Although Amsler grid testing was once advised, it’s no longer recommended.

One sign of the condition during testing can be bulls-eye maculopathy, says Richard Nauheim, MD, chief of ophthalmology, South Nassau Communities Hospital, Oceanside, NY. However, this can be late change, so the white paper says ophthalmologists should aim for regular screening before this sign appears.

Screening for retinopathy from hydroxychloroquine

Once a person is on hydroxychloroquine or chloroquine for several years, specialists should perform the necessary retinal tests every 6 to 12 months and look out for changes, Dr. Nauheim says. If there are signs of retinopathy, ophthalmologists should discuss the risks and benefits of the drug with the rheumatologist or other prescribing physician.

“Many times, patients and doctors are willing to take the risk because patients are debilitated by the disease unless they are taking it,” Dr. Fraunfelder says. “Then again, the only way to stop the retinopathy from progressing is to stop the drug. Even if you stop it, it doesn’t mean you’ll stop retinopathy. It can still progress after you stop the drug.”

Many rheumatologists know the risks of hydroxychloroquine or chloroquine and advocate for a baseline retinal exam, says rheumatologist Petros Efthimiou, MD, FACR, associate chief of rheumatology, New York Methodist Hospital, and associate professor of clinical medicine and rheumatology, Weill Medical College of Cornell University, New York. “If there is a question about retinal deposits, I personally contact the ophthalmologist to ascertain that it is a side effect directly related to Plaquenil treatment,” he says.

If a patient cannot take hydroxychloroquine due to the retinal effects — or sometimes, dizziness or gastrointestinal side effects — Dr. Efthimiou instead prescribes traditional immunosupressants or biologics. He says he needs to switch medication used about 1% of the time.

Still, not all rheumatologists or ophthalmologists monitor for side effects. An October 2014 study published in JAMA Ophthalmology found that among RA or SLE patients at high risk for maculopathy, almost 28% did not have regular eye-care visits, and 6% had no visits to eye-care providers. Also, 34.5% had no diagnostic testing for maculopathy during a five-year time frame of using the drug. Patients with rheumatologist-managed SLE or RA were more likely to have regular eye care compared with other patients.3

Other medications affecting the retina

In a review of safety alerts that pertained to ocular side effects issued in the past decade, retinal changes were the second most common problem.4 This category included retinal structural change, deposit and degeneration such as retinal detachment, says Ana Penedones, MD, Centre for Health Technology Assessment, Coimbra, Portugal. (The first category was visual disorders not elsewhere classified.)

Used commonly in breast cancer, tamoxifen can lead to decreased vision, color vision changes, and crystal deposits in the retina around the macula, Dr. Fraunfelder says. Still, “It’s pretty rare for patients to even notice these things. They frequently still have good vision,” he says.

When necessary, the ophthalmologist and oncologist can discuss whether the patient should switch medications due to tamoxifen’s untoward effects. “Sometimes, the benefits can outweigh the retinal side effects,” Dr. Mieler says.

Certain erectile dysfunction medications are associated with vision changes that seem to act in the retina, Dr. Fraunfelder says. This can occur because there are phosphodiesterase-5 (PDE5) receptors in the retina, and these medications are PDE5 inhibitors, he explains. “So if you’re modulating those, this will cause some visual disturbances.” For example, in higher doses, patients may see things with a blue tinge. Or, items like jewelry will have a hyper-reflective aura to make them appear more shimmery. While some vision changes are harmless, an increased risk for central serous chorioretinopathy exists, specifically with sildenafil (Viagra, Pfizer). The patient should usually stop taking the drug when this occurs, but Dr. Fraunfelder says it’s rare.

There’s also debate in the ophthalmic community as to whether sildenafil causes nonarteritic anterior ischemic optic neuropathy. The review from Dr. Penedones and co-authors included some spontaneous reports of of this neuropathy, noting the warning information for the drug was updated to include this as a possible risk.4

Thioridazine, an antipsychotic, can cause profound alterations in the retina and retinal pigment epithelium. While this medication is no longer routinely used, Dr. Mieler said doctors still see an occasional case. Topiramate (Topamax, J&J) used for migraine headaches or epilepsy, may be associated with retinal folds and angle-closure glaucoma. He sees cases of unexpected retinal folds from topirimate two to four times a year. Because of the expanding use of topiramate, there needs to be great effort to make neurologists and psychiatrists aware of the retina-associated side effects, according to a 2012 report in Clinical Ophthalmology.5 An additional report from 2004 with Dr. Fraunfelder reported suprachoroidal effusions as well as other side effects associated with topiramate.6

The coordination of a patient’s medications by all his doctors is critical going forward, says Dr. Penedones. “The list ... must be shared among all physicians involved in a patient’s health care, to be aware of the occurrence of adverse drug events or drug–drug interactions.”

This is also important as more drugs enter the market, which naturally could lead to additional possible interactions. In the safety alerts analyzed by Dr. Penedones and co-authors, none of the drugs studied were removed from the market, but there was a definite tendency to monitor more closely for risk factors and side effects, she says. In other cases, such as the epileptic drug ezogabine (Potiga, Valeant) — found to be associated with retinal pigmentation and reduced visual acuity — a boxed warning alert was added to highlight the importance of monitoring the eye, the authors reported.4

Prescribing physicians need to evaluate the retinal-related side effects and decide what is best for the patient. Says Dr. Mieler: “No two cases are quite the same.” OM

2. Marmor MF, Carr RE, Easterbrook M, et al; AAO. Recommendations on screening for chloroquine and hydroxychloroquine retinopathy: a report by the American Academy of Ophthalmology. Ophthalmolog. 2002;109:1377-1382.