A new injection cuts eye drops out of the postop process, giving many benefits to patients.

A new study suggests that patients could be better served by dropping eye drops entirely from post cataract surgery care, in favor of a single, intraocular injection delivered by a physician.

Issued by the Cataract Surgeons for Improved Eyecare (CSIE) and sponsored by Imprimis Pharmaceuticals, the study found that switching to the “dropless” injection procedure can greatly reduce Medicare, Medicaid and patient costs, and diminish patient compliance concerns.

Richard Lindstrom, MD, executive committee member of the CSIE and member of Imprimis’ board of directors and medical advisory board, describes the treatment as a compound containing all the medicines a patient needs to prevent postcataract surgery infection. A physician draws 0.2 mL of the formula into a syringe, then injects it into the eye’s vitreous cavity.

Dropless therapy costs $100 per one-time prescription, according to the report. Under Medicaid and Medicare, the cost of eye drop therapy ranges between $174 and $431 per eye.

Over the next 10 years dropless therapy can save Medicare and Medicaid more than $7 billion for patients undergoing cataract surgery, the study predicts.

No drops = no risk of noncompliance

The injection is just as effective as postsurgery eye drops, Dr. Lindstrom says, but provides several advantages. For the physician, it eliminates many concerns with patient compliance, as the injection can simply be administered following surgery.

Of the patients who rely on eye drops following cataract surgery, only about 30% of them will take them correctly, says Dr. Lindstrom. This can be for a variety of reasons, from patients simply being careless with instructions to being unable to use the drops properly due to physical ailments such as arthritis or neck trouble.

And those problems don’t even factor in the high cost of the drops. Patients generally need three types of drops, including antibiotics and steroids, following surgery. This can total $650 for the most effective version of the drug, says Dr. Lindstrom. Generic versions of eye drops are available at about half the cost, but they are usually less effective and must be taken more frequently, which can affect patient compliance. 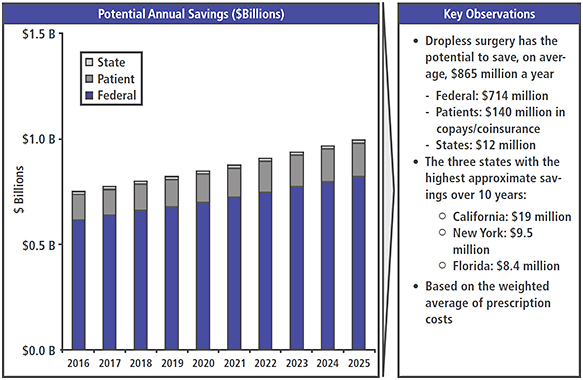 Dropless surgeries could save an average of $865 million a year
Source: CSIE (Cataract Surgeons for Improved Eyecare). “Analysis of the Economic Impacts of Dropless Cataract Therapy on Medicare, Medicaid, State Governments and Patient Costs.” http://improvedeyecare.com/CSIE_Dropless_Economic_Study.pdf.

Dropless therapy, though, costs the patient nothing as it’s bundled into the surgical facility fee with the cost absorbed by the medical center. However, Medicare does not reimburse the doctor or facility for the injection, as they would for eye drops.

The cost to caregivers is $20 or $25, depending on if they use the Tri-Moxi or Tri-Moxi-Vanc injection. Dr. Lindstrom prefers to use Tri-Moxi as a routine and holds the vancomycin injection as a reserve, when the risk of Methicillin-resistant staph is high.

“The lack of reimbursement is a barrier to adoption,” Dr. Lindstrom says, but the fact that the treatment is relatively new – only performed for about 5% of cataract surgery patients – is also a factor.

Another issue is the lack of an FDA-approved version of the injection on the market; physicians have to request it from FDA-approved compounding pharmacies.

Too steep a price

Companies have been interested in bringing a branded version of the injection to market, but after speaking with the FDA, the companies always decide they can’t afford the regulatory process, Dr. Lindstrom says.

In late November, however, Imprimis announced that it had partnered with cataract surgery provider NVISION Eye Centers to offer patients dropless therapy following cataract surgery at NVISION’s 24 locations in the western United States.

Despite the hurdles for using the injection, some patients find the treatment a great convenience.

For Frank Johnson, an 83-year-old retired engineer living in Huntingdon Valley, Pa., the decision to try dropless therapy was an easy one. He had cataract surgery earlier this year, performed by Dr. Joanna Fisher of Valley Eye Professionals, and was Dr. Fisher’s first patient to use dropless therapy.

When the two discussed the schedule for using the eye drops, Mr. Johnson decided that “it wasn’t very convenient” to put three different drops into his eyes at varying times throughout the day. He had originally purchased the three sets of drops at a total cost of $650, but when he committed to the less expensive dropless injection he was able to return the unopened bottles for a refund.

Mr. Johnson’s insurance covered the injection and surgery; he has had “no problem” related to the procedure. OM

Funding is currently being sought to develop the metric, which can save time and money for IOL manufacturers.

A new set of guidelines being developed can help better introduce extended depth of focus (EDOF) and accommodating IOLs to the marketplace.

Jack Holladay, MD, FACS, chair of the AAO Task Force on Developing Novel Endpoints for Premium IOLs, says that the EDOF lenses are already available in regions such as Europe and Australia, and are currently being evaluated by the FDA. The creation of these guidelines, which will establish the definition of an EDOF and the criteria and guidelines to be used to test the IOLs, will save manufacturers’ time and money.

EDOF lenses, a type of premium IOL, provide an extended depth of focus to maintain distance vision and improve intermediate vision. Accommodating lenses will have definitions, testing and criteria tailored for them at a later date, Dr. Holladay says.

With established guidelines, they will not need to “re-invent the wheel” since definitions, criteria and necessary tests, such as contrast sensitivity, are already established. The current process is very expensive for a company and the new guidelines will help lower those costs, says Dr. Holladay.

One very important part will be a metric for patient-reported outcomes; it will be developed by the Rand Corporation. More and more, the FDA is looking for subjective feedback from patients about devices, in addition to objective data from physicians, Dr. Holladay says.

The metric is universal, so all EDOF manufacturers will be able to use it as a template instead of paying to develop their own. It will cost $1 million to $2 million to create, which is the amount currently spent by manufacturers to create their own metrics.

A fundraising effort is under way by the AAO’s Dunbar Hoskins Center. Organizations, especially IOL manufacturers, interested in helping can contact Flora Lum, MD, the Executive Director of the Center.

The first EDOF lenses should be available in the United States in the next year or two, says Dr. Holladay.

The draft consensus statement regarding EDOFs, including testing criteria, can be downloaded at http://tinyurl.com/nuvwsct. Dr. Holladay expects a final statement will be acted upon in about a year.

The task force was originally convened in the spring of 2014, with the help of both the FDA and AAO, to address an increased demand for lenses that offered improved intermediate vision without compromising distance vision. OM

How do you reset your internal clock without sunlight? That’s a problem that’s thousands of blind people have faced for years, but study results involving the drug tasimelteon could provide an answer.

The multi-site study, led by Brigham and Women’s Hospital, Harvard Medical School, examined totally blind adults at 27 US and six German clinical research centers. Funding for the study came from Vanda Pharmaceuticals, producer of tasimelteon. All the test subjects had a non-24-hour circadian period.

Steven Lockley, PhD, a neuroscientist at Brigham and Women’s and study team leader, says that decades of research show that light is the most important component for resetting the body’s internal clock every day. Without light perception, that circadian rhythm cannot synchronize with the 24-hour day and starts to run on its own internal time.

Pfizer’s Director of Global Media Relations, Dean Mastrojohn, said it would be “premature” to discuss any effects Pfizer’s $160 billion merger with Allergan would have on specific drugs in Allergan’s pipeline, including eye-care products. Responding to questions via email, Mastrojohn added that “the proposed combination enhances the composition of Pfizer’s pipeline with areas that have both commercial and scientific potential.”

The combined new company will carry the name “Pfizer plc.” The transaction is expected to be completed in the second half of 2016.

TearScience has halved the price of applicators for use with its LipiFlow treatment platform. The cost of applicators is now $175. TearScience CEO John Boorady says the company is “answering the market’s demand for greater accessibility to our core technologies” in order to better evaluate meibomian gland disease.

A study from Transparency Market Research predicts the global market for ophthalmology diagnostics and surgical devices will reach $40,381.6 million by 2019, due to a growing geriatric population. In 2012, the global market was $26,012.6 million. The study can be viewed at http://tinyurl.com/pjwrhbm.

On average, a totally blind person has a rhythm that is about 24.5 hours long, which means that the body clock tries to send him to sleep a half-hour later every day. After 24 days, he is 12 hours out, and his brain promotes sleep in the daytime “putting him completely out of sync.”

Non-24-hour sleep wake rhythm disorder affects over half of totally blind people, totaling at least 60,000 people in the United States, says Dr. Lockley. Visually impaired people with some light perception can usually reset their rhythms naturally. There are a few, very rare cases of sighted people having non-24 disorder due to too much light exposure or genetic and other disorders.

Researchers ran two clinical trials to determine if a once-daily dose of tasimelteon given at a fixed clock time every day could be used to safely and effectively reset circadian rhythms in those with non-24-hour disorder.

The goal of the first study, which ran from 2010 to 2012, was to examine the proportion of patients who had their circadian clock entrained by tasimelteon, compared to a placebo group, and the effects on nighttime sleep, daytime sleep, sleep timing and a clinician’s rating of change in the patient’s condition. A greater proportion of the patients entrained to tasimelteon treatment (20%, or eight out of 40 subjects) compared to placebo (3%, or one out of 38 patients).

A clinical response was measured in 24% of patients (nine out of 38) given tasimelteon, compared to none out of 34 in the placebo group. The number of participants are different from the first part of the study due to incomplete sleep data among some subjects.

In the second study, all the participants’ circadian clocks were synced using tasimelteon, and then half the participants were switched to placebo. As soon as the switch to a placebo happened, the patients went back to a non-24-hour rhythm, says Dr. Lockley.

“We take for granted what light does each and every day to reset our clocks,” Dr. Lockley added. For people who have sight, it can be very hard to understand the debilitating nature of this condition. “Some patients have said it’s worse than being blind.” OM