Tackling glaucoma one Trabectome at a time

These pearls on surgical steps and tips on patient selection can improve outcomes.

Cataract removal evolved from large-incision, extracapsular surgery to small-incision, sutureless, phacoemulsification surgery that could be done in minutes. Glaucoma surgery is undergoing a similar revolution. Although trabeculectomy is still considered the gold standard, microinvasive glaucoma surgery (MIGS) is gaining traction and will continue to build momentum because of its significantly higher safety profile.

Trabectome (Neomedix, Tustin, Calif.) was the first minimally invasive glaucoma surgical procedure.1 The FDA approved Trabectome in 2004 and it became available commercially in 2006. Incisions into Schlemm’s canal (goniotomies and trabeculotomies) have been performed for decades.2 The unique features of Trabectome include electroablation and aspiration of debris under a protective foot plate that prevents damage to the scleral wall and collector channel ostia (Figure 1A).

An emerging early to moderate intervention

The Trabectome can be performed as a stand-alone glaucoma procedure or combined with cataract surgery, and in some patients it can be indicated for early to moderate open angle glaucoma.

Compared with traditional glaucoma surgeries, such as trabeculectomy or tube shunt, we have found Trabectome to be safer and gentler, offering shorter operative and recovery times, fewer complications, equivalent lowering of IOP and reduction of glaucoma medications.3 Because Trabectome spares the conjunctiva, patients can undergo traditional surgeries later. 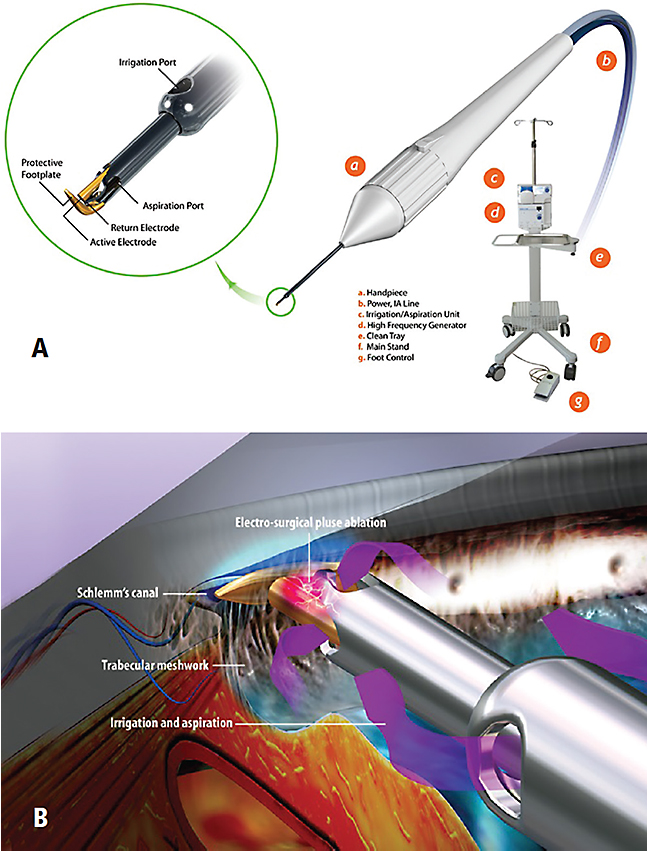 Figure 1. A) The Trabectome system includes features such as electroablation and aspiration of debris under a protective footplate that prevents damage to the scleral wall and collector channel ostia. B) Electrocautery ablation of trabecular meshwork reestablishes access to natural draining pathways of the eye.

Based on a personal experience of nearly 500 Trabectome surgeries and an analysis of 600 successful cases by myself and others, I wish to share my insights on patient selection, surgical technique and perioperative management for success with Trabectome.

Undersell and over deliver

Realistic expectations are important for both the surgeon and patient. The Trabectome is most appropriate for patients with mild to moderate OAG where the goal is to decrease IOP by about 30% or to the mid-teens and/or to reduce the number of glaucoma medications.4 In my experience, it is possible to decrease IOP to the low teens and occasionally more than 50% from baseline. Also, patients may discontinue more than one medication.

My approach is always to undersell and over deliver on patient expectations as well as my own. Another important consideration is the patient’s “nerve reserve.” The patient on maximal medical therapy (MMT) with an extremely high IOP is a great candidate for Trabectome if he or she has a decent nerve reserve of at least 0.75 C/D ratio. Both surgeon and patient must keep in mind additional surgery may be necessary.

Three characteristics that would disqualify a patient for Trabectome are:

• A contraindication to traditional glaucoma surgery if it were needed.

I have analyzed almost 600 patient outcomes from other surgeons in the Trabectome Study Group, including myself, all of whom had consistently successful patient outcomes at one year, to determine common characteristics favoring successful Trabectome surgery. I defined failure as IOP greater than 21 mm Hg, and looked for IOP reduction by less than 20% from baseline on any two consecutive visits after three months. Failure also included secondary glaucoma surgery.

A recently published prospective study in Germany reported supportive findings in a subgroup analysis of 173 eyes with pseudoexfoliative glaucoma had better IOP control and greater reduction of medications than the POAG group who also underwent Trabectome with cataract extraction.6 Steven Vold, MD, reported in 2010 that higher preoperative IOP led to greater IOP reduction with Trabectome and decreased the need for any subsequent surgery when combined with cataract removal.7 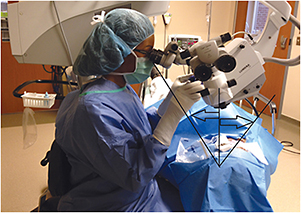 Figure 2. The set-up for Trabectome surgery involves tilting the microscope about 30° toward the surgeon. The patient’s head is tilted away from the surgeon.

Patients who succeed with Trabectome

The following case scenarios represent the types of patients who have had good outcomes with Trabectome. It is a starter list of clinical scenarios and is by no means complete.

• Early to moderate OAG, including:

− IOP uncontrolled and on zero to three medications with a visually significant cataract (VSC).

− Failed SLT and on MMT, possibly intolerant to topical medications and/or with significant ocular surface disease.

− Above categories who desire advanced technology with femtosecond laser and/or multifocal, accommodative or astigmatic-correcting IOLs.

− Uveitic glaucoma with open angle anatomy and with or without mild peripheral anterior synechia that can be lysed with the tip of the Trabectome.

− Heavily pigmented trabecular meshwork due to pigment dispersion syndrome or secondary due to iris chaffing from IOL with high IOP on MMT after SLT.

• Early to advanced OAG with IOP controlled and on one to three medications with VSC.

• Narrow angle glaucoma post-iridotomy on none to three medications with VSC.

• Moderate to advanced OAG, including: 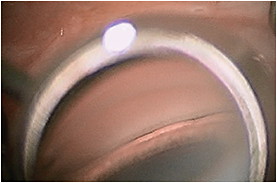 − Post-trabeculectomy or tube shunt where IOP is not at target and the patient is on medications and has a VSC.

• One eye has complicated course and patient is hesitant to proceed with another traditional surgery in the other eye. 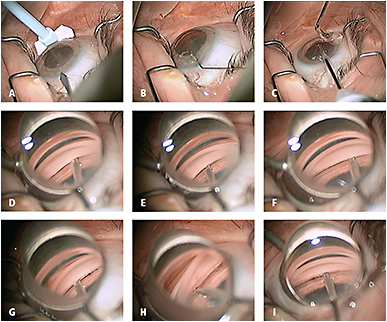 Figure 4. Trabectome surgical steps.
A) Make the corneal incision temporally with the 1.8-mm blade.
B) Depress the corneal wound incision with the cannula tip of the anesthetic syringe to allow egress of aqueous. Transient hypotony will congest Schlemm’s canal as blood pools.
C) Insert Trabectome hand piece into anterior chamber and place viscoelastic on cornea.
D) Place goniolens and advance Trabectome to make a dimple in the spongy trabecular meshwork by compressing the flat aspect of the footplate against it.
E) Advance forward piercing sharp tip through the trabecular meshwork and enter in the Schlemm’s canal.
F) Pause then pull the hand piece back slightly to confirm proper position and see the lacey trabecular meshwork tissue over the tip of the hand piece.
G) Depress the foot pedal completely to activate aspiration and ablation, advance the tip within Schlemm’s canal following the natural arc in one direction, going as far feasible, (H) here nearing the 12 o’clock position, then (I) disengage and ablate in the opposite direction.

After the surgical suite is set up (Figure 2), use a cut Weck-cel sponge (Beaver-Visitec, Waltham, Mass.) to stabilize the globe (Figure 4A). Upon entry, use the blade to widen the internal wound to create a trapezoidal incision and facilitate a large angle of ablation.

Use depressurization to congest Schlemm’s canal (Figure 4B). After depressurization, insert the anesthetic to follow. I use epi-Shugarcaine both before and after the Trabectome because the epinephrine acts as a vasoconstrictor and aids in reducing reflux of heme into the anterior chamber.

This step involves applying the viscoelastic on the ocular surface and placing the goniolens (Figures 4C and 4D). The viscoelastic can be a reapplied during the case anytime the view is limited.

Resistance and/or significant movement of the eye in the direction of the trabecular meshwork ablation may indicate incorrect positioning and tip insertion past Schlemm’s canal into the scleral wall. If this occurs, stop, remove the tip and restart as often as needed to get a very smooth advancement and ablation of tissue.

Ideally 60° to 120° of ablation should be done, however up to 180° of trabecular meshwork unroofing is feasible, especially after making the previously mentioned trapezoidal-shaped incision (Figures 4D through I).

If the procedure is Trabectome alone, irrigate the anterior chamber to remove any heme after removing the hand piece. Use additional epi-Shugarcaine, then hydrate the corneal wound with BSS for a watertight seal. Leave the IOP slightly elevated to provide tamponade. A suture is optional.

I place a bandage contact lens over the eye to be removed day one postoperatively. I have never had a postoperative wound leak or infection. Because of the fluidics, little bleeding occurs during the procedure. If excessive bleeding does occur during the actual Trabectome ablation, injury to the ciliary body may have occurred. Avoiding this comes with being thoroughly familiar with the anatomy of the angle (Figures 5A and C).

If the procedure is combined with cataract surgery, place dispersive viscoelastic immediately following the completion of the Trabectome. This provides a tamponade to help reduce the bleeding while the microscope and head position of the patient is moved to the proper position for cataract surgery. The cataract surgery will then proceed as usual.

Figure 5. Irrigation, aspiration and would closure.
A) Insert additional epi-Shugarcaine. Typically the egress of heme in the anterior chamber appears after removing the hand piece and during irrigation.
B) In combined procedures, place dispersive viscoelastic immediately after Trabectome to provide a tamponade while reorienting the microscope and head position for cataract surgery.
C) Hydrate the corneal wound with balanced salt solution for a watertight seal.

A major advantage of Trabectome MIGS is that complications are rare compared to traditional surgeries. The most common include elevated IOP, hyphema, steroid response, prolonged inflammation, closure of Trabectome cleft/PAS formation or need for additional surgery. PAS describes iris adhering to the angle after prolonged apposition.

If the IOP is elevated during the early postoperative period, I will typically burp the wound to release some aqueous humor and modify the drops as needed. An elevated IOP in the first day to week of the procedure is not indicative of a poor outcome, as the pressure can still come down over time.

Any hyphema clears after surgery; however, on rare occasions, even after months of the procedure, a spontaneous microhyphema may appear. This has also been reported in the literature.8

Prolonged inflammation needs to be treated as long as it is present, and you must take into account the possibility of steroid response with an elevation in IOP. Prolonged inflammation can increase the risk of PAS scar formation over the cleft, causing elevation of IOP and failure of the surgery. For this reason, continue to treat with pilocarpine TID for three weeks or more if the inflammation persists.

“I place a bandage contact lens to be removed day one post-operatively, and have never had a wound leak or infection.”

Gonioscopic evaluation of the nasal angle is important during the postoperative period to evaluate for scar formation and also to assess mechanism of IOP elevation if it occurs.

“Gonioscopic examination of the nasal angle post-operatively is important to evaluate for scar formation.”

Anterior segment OCT technology will enhance our understanding of the mechanism of glaucoma. Such innovations will enable assessment of diameter and atrophic changes in the collector outflow channels. Being able to determine whether the main glaucoma pathology is due to resistance of the trabecular meshwork resistance or atrophy of the collector outflow will provide a better means of selecting proper candidates for MIGS procedures directed at the trabecular meshwork or bypassing it, as in the traditional trabeculectomy and tube shunt, or new drainage alternatives that are coming down the pipeline.

Because glaucoma is a diverse and complex disease, it is imperative that those who treat glaucoma master the various tools that can best benefit the unique needs of the individual patient. OM