How Gen Y will save refractive surgery

As Millennials grow in numbers and wealth, their corrective options take new focus. 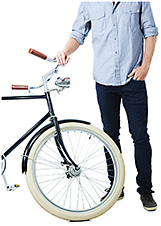 Since the Great Recession, elective refractive procedures have fallen far from their peaks in the earliest years of this century, but with that setback in the rear-view mirror, ophthalmologists see better times around the next curve and focus their surgical and marketing chops on Generation Y.

Generation Y, also known as the Millennial Generation, or Millennials, describes those born roughly between 1980 and 2000 — a group estimated at 72.5 million to 95 million, depending on the birth years of those included in the estimate — emerging 20- and 30-somethings who are flexing their economic power. Their interest in refractive surgery bucks the overall trends of recent years, say leading refractive surgeons and business leaders.

“Generation Y is twice as large as Generation X, are in their late 20s and are financially able to afford LASIK,” says Eric Donnenfeld, MD, of Rockville Center, N.Y., and president of ASCRS. Dr. Donnenfeld, and others acknowledge that while the heyday of refractive surgery may not fully return, their refractive-surgery work is vital and will reach consumers with the right mix of quality procedures, patience and marketing.

“The opportunity for LASIK to become even more popular is extraordinary,” Dr. Donnenfeld says. “It comes down to doing a good job in communicating to the patient the value of laser-vision correction, and whether the economy improves.” This article explores the opportunity Generation Y poses and what refractive surgeons can do to reach this group.

Mitchell A. Jackson, MD, founder and medical director of Jacksoneye in Lake Villa, Ill., estimates he has performed more than 30,000 LASIK procedures since 1995, and in 2000 he had the procedure himself. “Based on my own experience,” he says, “I am surprised my surgical LASIK volume has not been retained at 300 LASIK procedures a month.”

Now, he estimates he does 50 refractive procedures a month on average and his annual case load has declined from around 3,600 to between 500 and 600. Volume rises in “flex-spending months” — December and January — and the “tax-return months” of March and April, but falls off otherwise, he says.

He is not alone. Likewise, Richard J. Duffey, MD, of the Premier Medical Eye Group in Mobile, Ala., peaked at 125 refractive surgeries a month, but only 300 all last year. In his region the initial dropoff predates 2008 in his region, going back to the Sept. 11, 2001, terrorist attacks, Dr. Duffey says.

The Consumer Confidence Index, which measured 82.3 last month vs. a low of 38 in December 2008, “doesn’t impact the older patients who have established wealth and can spend extra money, ” Dr. Duffey says, but does impact “younger ones, for laser-vision correction to escape glasses, they are more impacted.”

Daniel S. Durrie, MD, of Durrie Vision in Overland Park, Kan., has seen refractive procedures in his practice bounce back to exceed pre-recession levels. Refractive procedures declined in 2008 and 2009, “but we are now 40% above our 2007 levels and should do more than 2,800 refractive surgeries this year,” he says. 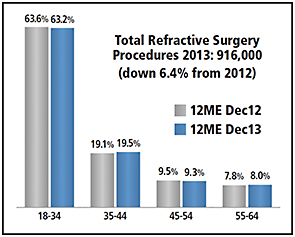 Mr. Celebrezze reports the company shuttered 20 under-performing LasikPlus centers and cut staff 50% during the recession. He adds the company performed about 300,000 procedures since 2008, and in the fourth quarter last year, LASIK procedures specifically increased about 3% over the same period in 2012.

The economy is a “U-shaped basin at the bottom, and it will start an upward trend,” says Dr. Duffey. “But with economic improvement, the tide will rise. A ton of money is sitting on the sidelines that isn’t going to be invested in eye care and vacations for fear it will be needed for other things like paying taxes. We all hope in six or seven years the economy will get better, that people will eventually act.”

Where their ears and eyes are

Marketing to Generation Y can come in the form of traditional media such as television, radio (with a notably nontraditional wrinkle — Pandora) and good local press, and non-traditional outlets such as social media, including review sites such as Yelp. For ophthalmologists not averse to the idea, partnerships with optometrists can also provide a source of referrals. Toss in creative patient financing, along with such conveniences as night and weekend hours (TLC, for instance, has Saturday hours as well as Friday-night surgeries), and positive word-of-mouth, and the foundations for a refractive surgery resurgence are in place.

Dr. Jackson offers an idea that might grab attention from any generation: a consumer campaign “utilizing the companies jointly sending a message to the public in TV commercials, etc., no different than pharmaceutical companies promote their drugs to the public with the appropriate disclaimers.” 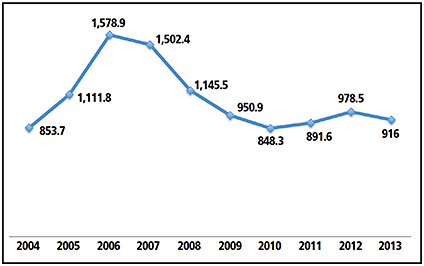 Refractive surgeries per year since 2004 (x 1,000)
VISIONWATCH: THE VISION COUNCIL

Gen Y to the rescue

Generation Y could turn that equation around, as it offers “great candidates for LASIK,” Mr. Celebrezze says. “The best time to get LASIK is when you are in your early 20s, because this age provides the longest lifetime benefit.”

Generation Y is well equipped to deal with the price issue, too, according to Dr. Jackson. “They can get financing easily,” he says. “Gen X are too overloaded with kids of their own. Baby Boomers are focusing on advanced IOL technology now as they are in the presbyopia years of their lives.”

Dr. Durrie concurs: “The Millennial generation, if they are excellent candidates, get outstanding results. If they have the surgery at 25 instead of 35, 10 years without glasses or contact lenses can pay for the surgery; if that generation adapts, we will see dramatic growth.”

Last year the American Refractive Surgery Council (ARSC) released results of its survey that indicated Generation Y “may be more open to LASIK than were previous generations.”

Social media and mom and dad

Dr. Durrie, meanwhile, laments that while “refractive surgery is the most successful elective surgery in medicine,” the onslaught of social media means refractive surgeons have to pull out all the stops to meet patients’ expectations. “Before the Internet, every unhappy patient could turn off nine; now, every unhappy patient can turn away 30,” he says. “If there is a bad review, it shouldn’t go unanswered.” 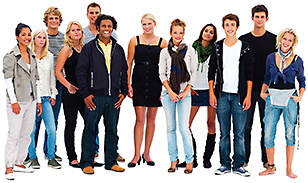 Millennials, according to a 2013 Nielsen report including ages 19 through 36, number 72.5 million.

This points to the necessity of reaching potential refractive-surgery patients with a positive message. “We, meaning the industry, don’t do a great job of educating patients,” Mr. Celebrezze says. “For LASIK, radio and the Internet are great vehicles to reach potential patients. We also need to do a better job of emphasizing that procedures can be paid with pre-tax dollars using flexible-spending and health-savings accounts. More patients are moving to health savings accounts which we believe in the long run will help the LASIK industry.”

Another referral source for Generation Y is their parents. “I’m now seeing patients whose parents had LASIK 10 or 15 years ago,” Dr. Donnenfeld says. “It is a rite of passage since patients’ parents had it in the past. This reassures the new patients coming in.”

Vanquishing fear as a factor

Still, the market faces three formidable roadblocks: fear of poor outcomes, patients’ lack of awareness of their suitability for the procedure and cost. “Fear is a factor,” Dr. Duffey acknowledges. “Every patient I operate on needs a little reassurance. A lot of people think they aren’t [candidates] and they are; for 5% to 10%, we tell them ‘no.’ “ While Dr. Duffey admits the procedure is expensive, he says, “If it is that important to you, you will find a way.”

“There has been a lot of negative press related to LASIK on dry eye, presbyopia, and unknown corneal factors which is out of proportion,” Dr. Jackson says. “As for the fear that a patient could go blind, this risk is much less than having an accident in your car on any given day.”

The price is sometimes right

Price is still a barrier for many. “Many patients are comfortable with the price but can’t find the financing necessary to move forward with the procedure,” says R. Bruce Wallace, III, MD, of Wallace Eye Surgery, Laser and Surgery Center, Alexandria, La.

Dropping the price to lure refractive patients is not a realistic option, Dr. Jackson says. “The only rate change that I found to have any impact on volumes in the past was if the price was dropped to less than $1,000 per eye, leaving no true profitability and enhanced malpractice liability.”

Dr. Donnenfeld, whose rate for LASIK has remained at $5,300 for both eyes, says economic woes can make consumers “pessimistic” and left feeling “that the glass is half-empty rather than half-full.”

Dr. Donnenfeld expects “pent-up demand waiting for the procedure” and touts his patients’ use of Facebook in sharing their experiences. “TLC patients are very active on social networks and Web sites where you can post reviews for others to see,” he says, with the proviso “nothing is as effective as an in-person, peer-to-peer recommendation.”

“LASIK is entirely self-pay and therefore is impacted by the economy and consumer confidence,” says Mr. Celebrezze of LCA-Vision. While LASIK services are “really separate” from the skin care offerings of PhotoMedex, the Pennsylvania company acquiring LCA-Vision, Mr. Celebrezze adds, “There could be some benefit from patient crossover, if someone came in for psoriasis treatment and realized what a great job we do with LASIK.”

Like Dr. Donnenfeld, Mr. Celebrezze sees a “pent-up demand from people who have been deferring the procedures.” He adds: “We grew revenues over the last six months and improved our financial picture. We also added eight vision centers over the past 18 months, including satellite vision centers that make LasikPlus more accessible to patients who live some distance from a full-service vision center.”

Refractive surgery by the numbers

But Generation Y numbers tell a sweeter tale. VisionWatch, which bases its numbers on an annual sample size of more than 110,000 adults, reports that, for the 12-month period ending December 2013, the 18-to-34 age group accounted for about two thirds of refractive procedures over the past 10 years. VisionWatch also reports that the same age group accounts for 60% of people planning the procedure in the near future (as compared to a drop of nearly 50% overall planning LASIK procedures since 2007).

He’s looking forward to “modest growth” in the refractive surgery space. “LASIK procedures historically have been tightly correlated with consumer confidence and, to a lesser degree, with unemployment rates, both of which have been trending in the right direction,” he says.

Dr. Jackson voices optimism for a rebound in refractive procedures for two reasons. One: recent research shown that dry-eye patients with an autoimmune disorder other than Sjögren’s syndrome, which can now be diagnosed with a finger-stick test, can have LASIK if their disease is stable and asymptomatic. Two: “LASIK volume will be a plateau over the next decade with a larger rise in volume in 10 years as the Gen Y patients will increase in numbers for LASIK once they become more financially stable.”

Generation Y may be on its way there. OM