Paul Larson, MMSc, MBA, says his 30-year-old son comes from a more health-conscious generation than he does. People in his son’s age bracket, Mr. Larson speculates, seem more receptive to preventive health care. That’s a good thing, but the federally funded Health and Retirement Study in 2007 suggested his father’s generation was also more health conscious. Mr. Larson, a baby boomer, is of a generation that is developing diabetes, among other chronic diseases, at staggering rates.

The potential surge in patients with diabetic eye disease is going to challenge ophthalmologists and other eye-care providers already stretched thin. This article looks at how ophthalmologists may need to adapt their staffing strategies to accommodate the next wave of patients with diabetic eye disease, even as the number of medical eye doctors stagnates, as well as the potential role of telemedicine.

NEI has estimated 7.7 million people in the United States have some degree of diabetic eye disease. That represents an 89% increase since 2000, and projections show another jump of 75%, to 13.5 million, by 2020. For ophthalmologists this likely means a steady annual influx of diabetic retinopathy patients. Prevent Blindness America has declared November Diabetic Eye Disease month to increase awareness about the disease.

Diabetic retinopathy can be a devastating diagnosis to patients, not only because of its threat to vision — the CDC now calls it the leading cause of new blindness in adults — but also because many patients first learn they have diabetes after an eye examination. For ophthalmologists this likely means a steady annual influx of patients with diabetes-related eye disease.

Between the boomers, who comprise 28% of the US population, developing age-related eye diseases, a surge in diabetes cases and an expected bevy of patients who could gain coverage under the Affordable Care Act (ACA), the plain reality is that doctors are going to see a lot more patients.

“The ACA will mean more people will be getting into the system,” says Susan Pisano, vice president of communications for America’s Health Insurance Plans. “From a health-care prevention perspective, we’re encouraging people to get an annual retinal exam. It’s an important measure with respect to insurers.”

With ACA-implementation just around the corner, as many as 32 million additional lives would be covered. Diabetic retinopathy has no symptoms in the early stages, which is part of the reason insurers are encouraging preventive care, including an annual eye examination. More patients getting eye exams, even if they go to optometrists, mean more diagnoses of ocular disease.

One aim of the ACA is to integrate medical care so doctors of multiple disciplines are more aware of patients’ overall health. In the context of a growing number of diabetic retinopathy cases, this could mean a number of possible changes to how patients get into the care system. More primary care physicians may rely on telemedicine (widely used in Australia and the United Kingdom, but not in the United States) to screen patients for diabetic retinopathy and to involve ophthalmologists interpreting the fundus images.

Currently, a “Catch-22” stands in the way. Payers don’t allow for primary-care physicians to code for fundus photography. But eye-care professionals cannot purchase them for other doctors due to federal anti-kickback regulations. This is akin to payers restricting who can perform the exams, says Mr. Larson, a practice consultant with the Corcoran Consulting Group and former president of the Association of Technical Personnel in Ophthalmology. However, that is a pre-ACA problem. “The ACA will likely shift this to general practitioners,” he says. 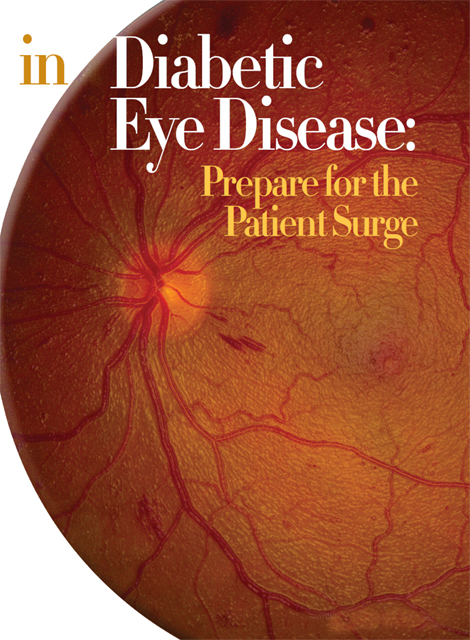 The best solution is “having fewer diabetic patients,” Mr. Larson says, which is easier said than done. Some patients may visit their eye doctor regularly, but avoid regular checkups with their primary-care doctor. It’s common for patients to first learn of their type 2 diabetes from an eye doctor.

Ophthalmologists as well as optometrists could help by addressing the ocular effects of diabetes in annual exams. Yet, that is not likely to happen, according to health-care consultant John Pinto, of J. Pinto & Associates. “In the typical eye-care setting there isn’t enough time in the day to talk about nutrition and exercise,” he says. “It’s just about concentrating on the part of the patient between their upper and lower eyelashes.”

The country is, essentially, facing a dual problem: Fewer ophthalmologists and more patients, Mr. Larson says. This perfect storm of trends puts the demand for innovation on the physician. “I suspect we may end up having ophthalmologists train more nurse practitioners (NPs) and physician assistants (PAs),” he says.

Optometrists are already delivering much of the mid-level care that PAs or NPs could provide in the eye-care setting, Mr. Pinto suggests. But Mr. Larson envisions new roles for these ancillary health professionals.

“The population of beneficiaries needing care may quickly outgrow what ODs and MDs can provide alone, even with increased tech help,” Mr. Larson says. “It’s likely PAs and NPs need to be considered and put into the mix for those things they can legally do. Actual roles are largely to be determined because few NPs or PAs work in eye care. MDs did not train with PAs or NPs so there will be a learning curve on the part of MDs as to how to utilize them in their practices.”

Indeed, changes to staffing models are going to be necessary, but Derek Preece, senior consultant at BSM Consulting, says practice administrators and physicians should know this increased patient flow might be more akin to slowly rising sea levels than a tidal wave.

A 2% to 5% annual growth rate in overall patient traffic may not be noticeable to doctors and staff in the office everyday, but “if we go 10 years out, we’ll see a big increase,” he says. “This is going to be a consistent trend over time.”

Mr. Pinto agrees the increase will be gradual, “more of a rising tide than a tsunami,” he says. To keep up with this patient growth, Mr. Larson says managers should build their staffs accordingly. In other words, hire more people. How many more? Mr. Pinto offers this rule of thumb: A practice typically uses 0.3 to 0.5 staffing hours covering reception, data entry and call center for each patient visit (including post-op visits). 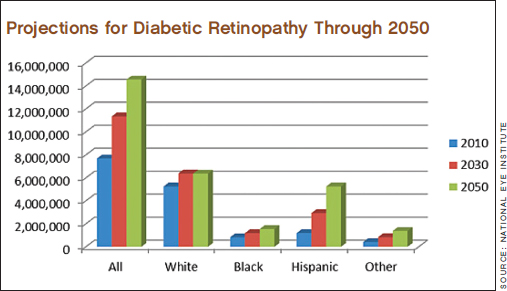 The exercise of preparing for this increase in patient flow requires a comprehensive re-evaluation of staff roles, Mr. Preece says. For instance, he suggests regularly hosting training programs for techs, front desk and billing personnel as well as finding waste to cut in patient processing.

Beyond staffing, the predicted rise in diabetic eye disease may also change how these patients Massachusetts Eye and Ear Infirmary and Beetham Eye Institute formed a clinical alliance to address the eye-care needs of those with or at risk for diabetic-related eye complications, calling it the Joslin Vision Network in Boston. Telemedicine is changing how doctors in the network practice, says Paolo Antonio S. Silva, MD, assistant chief of the Center for Ocular Telehealth at Joslin Vision Network.

“The number of people with diabetes is going to rise dramatically over the next 10 to 20 years,” he says. “Telemedicine is the way to do this. It’s the way to go to the patient and get into their communities.”

Small practices could utilize telemedicine in much the same way the Joslin Network has by coordinating care with primary-care providers, Dr. Silva adds. Telemedicine provides the network with 40% of new patients, he says. “EMR and telemedicine allow us to streamline this work,” he says.

Like Mr. Larson, Dr. Silva worries that issues with reimbursement could threaten the progress these technologies offer.

John Hopkins University in Baltimore has, for the last decade, also been on the forefront of telemedicine applications in ophthalmology. While these large institutions may have the resources to be early adopters, a Yale study pointed to the merits of investing now. The study, led by Zhijian Li, M.D., showed that by relying on telemedicine systems, a physician can decrease the number of visits to specialist and reduce costs per retinal exam.

Dr. Li’s study involved a cost-benefit analysis of telemedicine-based digital retinal imaging, taking into account training, annual costs and transportation. It found that while traditional retinal exams could cost a patient up to $77.80, the cost to the patient using telemedicine was only $49.95.1

“The development and use of portable digital equipment has allowed a profound change in the screening process in a variety of medical specialties,” the study reported. “The combination of telemedicine and digital retinal imaging technology provide the potential to have the diabetic population evaluated by an ophthalmologist remotely for the screening for diabetic retinopathy.”

Ophthalmologists will find different ways to prepare to treat this growing cohort, but the time to look into it is now, because there’s competition.

“If you look 20 years into the future, the number of optometrists is going to expand,” Mr. Larson says. He points to an increase in the number of students training to be optometrists. The Bureau of Labor Statistics lists optometry as a field growing much faster than others. The projected average rate of growth between 2010 and 2020 for all occupations is 14%, but it’s 33% for optometry, while ophthalmology is not keeping up.

Meanwhile, the number of medical school graduates entering ophthalmology residencies has been stagnant for the last 10 years, at around 442 a year, according to the American Board of Medical Specialists. Mr. Larson suggests these statistics could affect the medical side, “unless they can keep up.” OM