While some relationships between ophthalmologists and optometrists have suffered over scope-of-practice legislation, the incoming tidal wave of eye care-needing patients means one thing: ODs and MDs will have to work together. Ophthalmology Management surveyed readers across the country about their thoughts and practices regarding co-management. The admittedly unscientific, but thought-provoking, results (culled from over 200 ophthalmologists) appear here, and give insight on how comanagement currently rates in the US.

Figure 1: Are optometrists employed at your practice?

Figure 2: If you DO NOT use an integrated model of care, what do you feel is the proper role for an optometrist?

However, many respondents noted that all of optometrists’ tasks — whether small or large — are closely monitored by MDs to ensure patient safety. After all, isn’t that what everyone’s working towards? Creating a practice environment where ODs and MDs feel comfortable asking each other questions and delegating tasks seems to be the key to a healthy relationship between the two.

For example, Stewart Shofner, MD, of Nashville said that optometrists and ophthalmologists work well together at his practice. “If the patient requests my input, I will always answer their questions. Just as I refer a patient for any problem I am not comfortable with, so should an optometrist,” he says. John J. Kearney, MD, a retina specialist in Hayward, Calif., has a similar setup, where optometrists’ responsibilities “require consultation with one of our staff ophthalmologists.”

Is this kind of over-the-shoulder monitoring warranted? Depending on the practice and level of optometric expertise, many say absolutely yes. Some have seen ODs make mistakes that could have been avoided if an MD was called upon earlier. A general ophthalmologist in Texas said that in addition to seeing his optometrist overprescribe antibiotics and steroids, the OD “occasionally waits too long to refer refractive corneal infections. I find he and others in the area bring the patient back more often than I believe necessary and patients seem to get extra tests (i.e., visual fields, OCTs).”

Yet it’s become increasingly difficult to carry on day-today care without relying on an optometrist’s support. One Los Angeles surgeon reported that he comanages cataract surgery patients and estimates that without the ability to send patients to ODs for care beyond day 1 and week 1 postop checkups, he would likely do around 30% fewer cataract surgeries. It’s precisely this model of care that may see a significant upswing in popularity as eye care professionals experience a boom in business over the next few years. Rather than seeing an increased use of optometrists as an economic threat, ODs just may be a golden ticket to raising productivity. Unfortunately, despite the potential demand, many still fear that comanagement will be misused, as it has been in the past.

For those polled who do not have optometrists employed at their practice, 69.4% said they do not comanage with local ODs either, the chief reason being the disparity between levels of medical education — a justified source of distress. However, it’s impossible to have a heated discussion about scope-of-practice without bringing money into the squabble. While ophthalmologists stress that their opposition towards expanding optometrists’ responsibilities has solely to do with patient safety concerns, ODs embrace the argument that MDs only fear a potential loss of revenue.

Then there is the issue of comanagement fees and perceived kickbacks. Are referral relationships simply a cover for ensuring business? Many believe that the answer is yes.

“Comanagement has its place, but in a suburban or urban environment there is no reason that the operating surgeon cannot do his own postoperative care. To refer a patient across town in order to generate a comanagement fee is not good patient care,” says a Richmond, Va., general ophthalmologist. “Cataract comanagement is the purchase of referrals for financial consideration. It is unethical and would be illegal if not for optometric lobbying,” said a retina specialist in Massachusetts, an opinion that was echoed by a number of respondents.

Interestingly, comanagement fees seem to be a largely American problem. A retina specialist in Chicago explained that retinal specialists in the US are often criticized by their European counterparts for referring cataract surgery over to another surgeon in patients with combined cataract and macular hole. Outside of the US, a retinal surgeon typically does both parts of the procedure. Here, he says, “if a retinal surgeon also does a phaco and takes the lens out during the vitrectomy, he or she is ‘robbing’ the referring comprehensive ophthalmologist of a bread-and-butter cataract procedure.” Instead, the patient goes under the knife twice. Thus, he says, often the patient’s best interests are sacrificed to financial motivations.

Figure 3: If optometrists are NOT employed at your practice, do you comanage with local ODs in your community?

Avoiding arguments over finances is possible with the right system in place. Anthony Johnson, MD, of Greenville, SC, managing partner of an 18-doctor (15 MDs, three ODs) practice uses optometrists for primary care, including use of therapeutic drugs. However, ODs are treated as equal partners, meaning they are subject to a stringent peer review process for patient care as well as the same opportunities for profits as MDs.

“We use a productivity model where 20% of all professional revenue is split among all doctors equally and 80% is directed to the one who produced it,” he said. “It rewards hard work and does not create a conflict of ‘who referred a patient for surgery.’ This method, he said, eliminates any issues with comanagement and fees.

No surprise here: The overwhelming majority of respondents strongly opposed expansion of optometric scope of practice (Figure 4). The larger issue, though, is that the doling of medical responsibilities has landed in politicians’ hands — folks who generally know very little about what it takes to qualify someone to perform surgery. 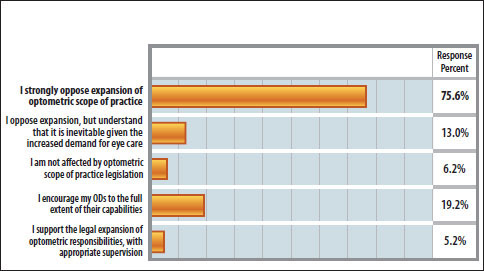 Figure 4: How do you feel about scope of practice legislation and the legal expansion of an optometrist’s responsibilities?

“I strongly disagree with the amount of money and effort that goes into the scope of practice consternation. Legislators love any argument because it encourages the two parties to give legislators money. Legislators do not have the background to understand the decisions they are asked to make, so it comes down to decision by relationship,” said Dr. Johnson.

“If an optometrist wishes to practice medicine, he should go to medical school and not to the state legislature,” added Anthony G. Finder, MD, of Chicago. “Unfortunately, legislators are generally unimpressed by the considerable differences between an optometric and medical education and just regard these issues as a turf battle.”

While historically, yes, there has always been a subset of vocal optometrists petitioning to gain a wider scope of medical care, does the majority of ODs even want more responsibility? “Most of the ODs I work with are comfortable with their scope of practice and do not push for more privileges. I wouldn’t work with those that do,” said a cataract and refractive surgeon in Indiana. He feels that optometrists currently have an appropriate scope of practice, but understands that expansion may be inevitable eventually.

Mark Horton, OD, MD, of Phoenix noted that while the original scope expansion that occurred in the 1970s and 80s was appropriate — when ODs could start dilating eyes and using local medications — some of the current legislation could put patients at a considerable risk. Many optometrists willingly agree to this fact, and have no interest in taking on surgical procedures. So then why the continual battle?

It’s sometimes forgotten that the original purpose of comanagement was to alleviate the travel burden for patients in rural areas. When clever healthcare providers figured out how to use the idea as a way to pick up extra cash, the meaning behind “comanagement” started to shift. “In essence, comanagement was hijacked by the marketplace and rendered foul by the very people charged with the responsibility of caring for and protecting the patients,” said one ophthalmologist in Missouri. He watched with dismay as comanagement became a “legal form of fee-splitting, where ODs ‘shop’ for the best deals to get the biggest percentage of the postoperative fee.”

He, among others, believes that it is still possible for the construct to be useful, as long as it reverts to being applied only in hardship cases, as originally intended. “The MDs and DOs would likely get all the same patients anyway, without the requirement to release around 20% of the meager reimbursement that they already get for cutting a human’s eye open and restoring their vision.”

Overall, the future of comanagement is not a question of whether or not it will happen. Instead, it’s a matter of how it is best executed. Comanagement will be unavoidable, unless more residency slots are created to train more ophthalmologists.

Optimists foresee a positive change in the way ODs and MDs work together. “ODs and MDs share much of the same professional language and mental DNA. So much can go unsaid between members of the two professions — you don’t have to constantly explain yourself to an OD like you do to every other health professional,” said John F. Maher, MD, of Torrance, Calif. He believes that eventually, the training programs of optometry and ophthalmology will combine in some way.

Others think that major organizations should take the blame for the unfortunate way comanagement has been abused and set new precedents for how the idea should be put to use in the future. “The AAO and the ophthalmology community is at least partly responsible for this issue. Comanagement and the MD-OD quid pro quo relationship are purely pecuniary in nature in non-rural communities, but it is tolerated by the AAO and the Board,” said one anonymous respondent. “For this reason, I invite the leaders in cataract surgery to stop wasting time. You must first set your own house in order.” OM